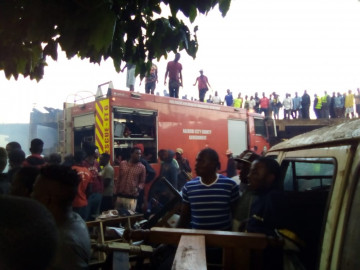 Several families in Kawangware 46 area spent the night in the cold following a fire outbreak that destroyed houses and properties worth millions.

Reports indicated that the fire which broke out on Saturday night, October 23, may have been caused by a gas cylinder in one of the houses.

"A woman was  cooking and had placed the gas cylinder very close to the mabati wall, and which made it to over heat and burst into flames," a witness recounted to Citizen Digital.

According to witnesses, the fire quickly spread to the neighbouring houses - leaving a trail of destruction.

Area residents sprang to action to salvage property before firefighters from the Nairobi Metropolitan Services (NMS) responded to put out the fire which kept spreading like bush fire.

"I was not able to do save anything from my house because the fire and the smoke were overwhelming. I was only able to escape with my life and the clothes I am wearing. I don't know where I will start from," said Lucas Makokha, one of the victims of the incident.

Reports also indicate that no lives were lost in the incident - and no one was seriously injured even as rescue operations continued.

The fire came barely two weeks after a similar one happened in the same vicinity where property worth thousands of shillings was destroyed.

Area Nyumba Kumi elder James Karuri has appealed to area residents to be cautious when hand ling electricity and fire utilities while at home to avert such incidences.