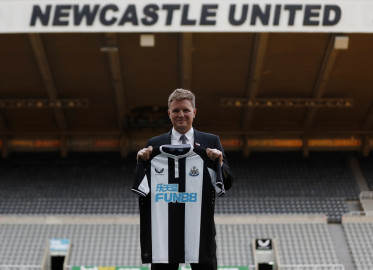 Newcastle United's new manager Eddie Howe said on Wednesday that his first goal was to keep the club in the Premier League following their dismal start to the season, adding that his team must "suffer" and "sacrifice" to stay up.

Newcastle are winless and second from bottom in the league standings with five points from 11 games.

Speaking for the first time since succeeding Steve Bruce on Monday, Howe said: "I've had some good conversations with the owners but it's all about the short-term. The aim is to stay in the league, that's my main focus.

"Absolutely confident (can avoid relegation), but I make no promises on that. I'll give everything to the club. I believe we have the ability in the squad but it's going to take a lot of hard work and sacrifice."

Bruce left the club by mutual consent last month, two weeks after Newcastle were acquired by a Saudi Arabia-backed consortium.

Howe had been out of work since he left Bournemouth in August 2020 after the south-coast club were relegated from the Premier League on the final day of the season.

The 43-year-old said that the time away from the sport had re-energised him and made him a better manager, one who was more in touch with the modern game.

"I felt I needed to rest, recharge and re-educate myself ... I'm better organised now and my way of working is more streamlined," added Howe.

While stressing that he did not want to look too far ahead, Howe said he wanted his side to play an entertaining brand of football.

"I feel I have a good idea of the teams strengths and weakness ... the game is always about how much you commit one way or the other but if you watch my Bournemouth teams always tried to play on the front foot and play brave attacking football," he said.

"I want to play football that entertains and excites and I think that is the type of football Newcastle fans want to see."

Howe confirmed that Jason Tindall, Stephen Purches, Simon Weatherstone and Dan Hodges will make up his backroom staff while Graeme Jones, who was appointed caretaker boss following Bruce's departure, will also be part of the team.

The new manager's first game in charge will be against Brentford in the league at home on Nov. 20 after the international break.