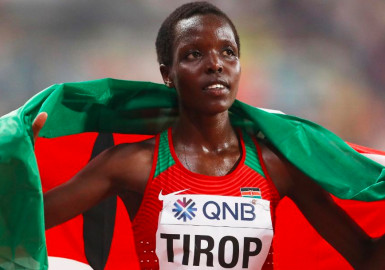 A post-mortem examination on the body of the slain Olympian Agnes Tirop has revealed that she died as a result of multiple stab wounds on the neck and blunt head trauma.

According to Government Pathologist Dr. Dorothy Njeru who conducted the exercise with forensic physicians, the late Tirop also lost a lot of blood due to the stab wounds allegedly inflicted by her partner Ibrahim Rotich who is in police custody.

It is at the Iten County Referral Funeral Home where DCI detectives, forensic physicians, two government pathologist and the family of the late Olympian Agnes Tirop camped for the better part of Tuesday.

The autopsy exercise which began in the afternoon taking close to fours hours before the pathologist revealed the findings to the family.

"Generally, the examination has shown injuries due to stabs and also injuries to due to blunt force trauma, the stab wounds were to the neck and the blunt trauma was to the head,” said Dr. Njeru.

The family of the slain olympian who witnessed the exercise have expressed their hope that justice will be served after the autopsy report revealed the gruesome manner in which their kin met her untimely death at a time when the country needed her most.

The findings which have since been released to the DCI will aid in investigations as police are still holding the main suspect Ibrahim Rotich who is alleged to have hit her on the head with a blunt object before stabbing her several times following a family fued.

Her body was later discovered in the house.

The Late Tirop will be laid to rest at their rural home in Nandi County on Saturday.