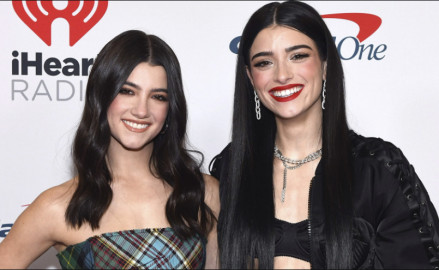 The D'Amelio sisters during a past event. PHOTO | COURTESY

Tiktok, the video-sharing app that is now the world’s new most popular online destination, continues to prove itself as a force to be reckoned with, further leading sensational users to top earning stars by simply posting on the platform.

With all the dances and lip-syncing to popular sounds, skits and original content, TikTok stars have seen a surge in their earnings as they looked to further broaden their fame on the app.

To compile the list, below are the top-earning TikTok stars of 2021, per Forbes’ estimate (excluding celebrities active on the app like Will Smith and Jason Derulo).

The ranking is from what the TikTokers brought in from January 1 to December 31, 2021 from sponsored content and other income sources.

Charli, an American social media personality and dancer started her career in 2019, when she started actively posting content on TikTok, where she shared dance videos to trending sounds on the platform.

She currently has the app’s largest following with over 133 million and a ballooning amount of business interests.

Dixie is the elder of the D’Amelio sisters and kick-started her career on TikTok through sponsored content, brand endorsement deals and other business endeavors, following in the steps of her sister, Charli.

Addison first joined the app in 2019 and was part of a TikTok collaborative group called ‘Hype House’, gaining million of followers in a few months, therefore elevating her profile further.

Bella Poarch created her TikTok account in 2020 where she started actively posting based on gaming and cosplay content. She gained notability in a few months, lip-syncing to videos that went viral, some specially earning her the most liked videos of all time.

In addition, the TikTok star is now the third most-followed person on the platform, currently having garnered over 87 million followers.

Josh Richards on the other hand is a Canadian social media influencer. His posts that have rapidly skyrocketed on TikTok include dancing, lip-syncing and video skits.

This TikTok king has closed deals with the likes of Amazon, Cash App, among others, following his bro antics on his feed.

Kris Collins is a popular star on TikTok, known for her sketch comedy skits on her account named ‘Kallmekris’.

Kris plays a number of recurring characters, many of them based on family members, including her immigrant mother.

She accumulated fast fame when she joined TikTok, largely on her brother’s suggestion after the pandemic hit and hindered her former job as a hairdresser.

Avanni Gregg is an American Internet personality who bagged the ‘Shorty Award’ for TikToker of the year in 2019 and was on the ‘Forbes 30 Under 30’ in 2020’s social media category.

In 2019 as well, Gregg’s first viral video on TikTok was of her transformation into a Harley Quinn-styled clown that led viewers to nickname her “Clown Girl”.