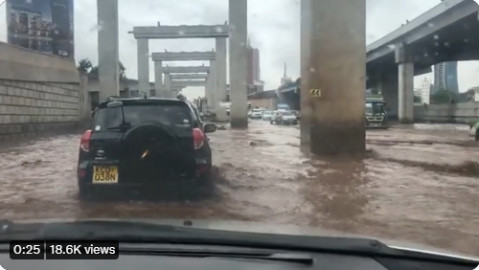 File image of a vehicle in a flooded section of Mombasa road. PHOTO/COURTESY

Nairobi motorists have been cautioned to avoid Uhuru Highway due to heavy flooding witnessed since the wee hours of the morning.

The flooding is the aftermath of a heavy downpour experienced in many parts of the country on Friday night.

In a video that surfaced across social media on Saturday morning, vehicles were seen almost fully submerged by the massively flooded waterways towards the capital’s Central Business Department (CBD).Mombasa Road

As their norm, Netizens were quick to respond to the videos with some attributing the flooding to the ongoing construction of the Expressway while others blaming it on the government laxity.

Here are some of the reactions by the Kenyans on Twitter.

It's all about proper drainage. There's no connection to concrete being everywhere.

"Goodbye ball joints etc. Mechanics will be busy this December."

"The disaster that comes with the expressway. This is going to be messy."

"Why don't you have a ferry on standby for a day like today?"

In the recent past, the county has occasionally experienced heavy flooding especially in some parts along Mombasa road namely; South C and the surrounding estates which are termed the 'hotspots for floods'.