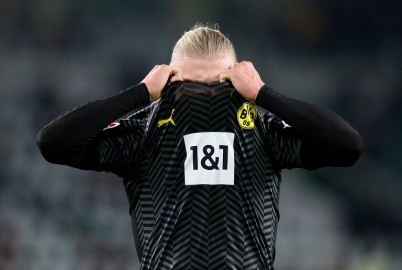 Germany will decide on Thursday that all Bundesliga matches should be played in empty stadiums as the country struggles to contain the fourth wave of the coronavirus pandemic, the premier of the eastern state of Saxony said on Tuesday.

Leaders of Germany's 16 federal states held talks with outgoing Chancellor Angela Merkel and incoming Chancellor Olaf Scholz on Tuesday to discuss what steps to take next to contain the crisis.

They will meet again on Thursday to make decisions, Michael Kretschmer said.

"Then it be will be decided that Bundesliga games will be played without fans," said Kretschmer.

Earlier, the premier of the southern state of Bavaria had called for matches to go ahead without fans.

He also said that if necessary, Bavaria - home to Bayern Munich - would go it alone and implement the step.

The move could affect the high-profile group-stage meeting between Bayern and Spanish giants Barcelona in the Champions League on Dec 8, followed by their Bundesliga clash with Mainz three days later.

Bayern are away at Borussia Dortmund on Saturday.

Fellow Bavarian clubs like Augsburg and Greuther Fuerth would also be affected by a decision to keep fans away.

Clubs in Germany played in empty stadiums last year when matches resumed following a shutdown due to the pandemic.

Bavaria, one Germany's hardest hit regions in the new wave of the coronavirus, last week introduced a rule that soccer stadiums - including the home of Bayern Munich - could only allow 25 per cent capacity at matches.

Stadiums were only allowed to admit people who are vaccinated or recovered from COVID-19, and only if they could show a negative test.

Germany reported 45,753 new infections on Tuesday while another 388 deaths were recorded - the highest daily figure since early March which brought the overall death toll to 101,344.