'He’s hating because I’m ahead of him!’ Diana B slams Willy Paul 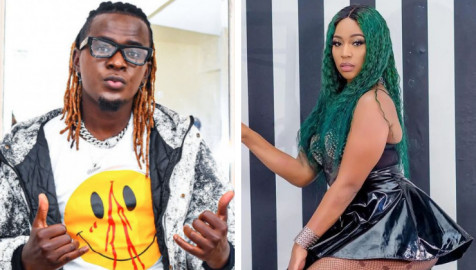 Diana B, the newly unveiled rapper in town, has been facing a lot of backlash from netizens and household names in the music industry following the debut of her rap career.

Diana claimed that the ‘I do’ hitmaker is projecting hate on her because of the number of views that her first song has amassed on YouTube.

Speaking during an interview on Kiss 100 on Friday, Diana stated that she is ahead of Willy Paul, despite being a novice in the music industry.

“I released my first song three days ago, right now, I’m already at 1 million views. This guy has been in the industry for years. I joined the music industry three days ago and numbers don’t lie. I feel like he is hating just because I am ahead of him,” she said.

She further took to her social media to declare herself the first Kenyan female artist to hit 1 million views on YouTube in three days.

“They first run their mouth, and then they run. Record set as the first Kenyan female artist to hit 1 million views in 3 days,” she stated.

Diana went on to ask netizens to mention artists in her comment section who are hating on her while struggling to match her number of views.

“Team Diana, tag any artist who has been hating but deep down you know they are struggling to get attention for their song views to try reach mine. What God has blessed, no man can curse,” she wrote.

Willy Paul was among the notable figures that reacted to Diana’s song, as he laughed off her entry into the music industry.

Others include Femi One who warned netizens against comparing her to Diana, adding that she can only be weighed up with Nyashinski.