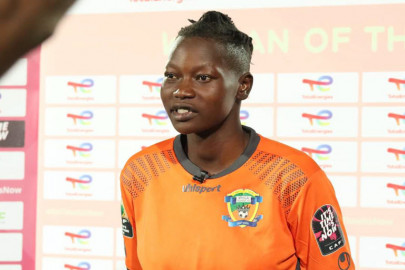 Vihiga Queens goalkeeper Lilian Awuor just before receiving her Woman of the Match Award after their 1-0 CAF Women's Champions League loss to Mamelodi Sundowns in Cairo on November 6, 2021 Photo/ Courtesy

Vihiga Queens goalkeeper Lilian Awuor thinks her dream move to Europe could be drawing near with the CAF women’s Champions’ league exposure, which she calls a strategic platform to exhibit her abilities.

Awuor was named Woman of the Match despite Vihiga Queens narrowly losing 1-0 to Mamelodi Sundowns of South Africa in their opener on Saturday, further increasing her confidence she has something to offer beyond Africa.

The 23-year old emerged the first goalkeeper to bag the individual award and in an interview with Citizen Digital she is optimistic of landing a deal in Europe after potential agents approached her.

“I was so much motivated by the award and I will ensure I work extra hard in our next matches as we aim a semifinals spot. My dream while I was young was to become a professional player and I think this is my year because after Saturday’s performance a couple of agents have contacted me and are willing to place offers immediately the competition is over,” she revealed.

Although it is not clear where Awuor could head next after the CAF competition, she hinted that she may end up in France.

“For now I can’t reveal anything, the agents met with our club management and the talks are going on now. I will reveal the deal once it’s done,” she noted.

Awuor played a key role as against Mamelodi who were quite ruthless in their attack, their constant attempts keeping her busy in the entire match.

Vihiga have meanwhile intensified their preparations for their second match of pool B set for Tuesday where they will face Morocco side Asfar who thrashed Nigeria’s River Angels 3-0 in their opener.

Vihiga on Monday held their last training session at the 30 June Stadium ahead of the clash to be staged at the El Saleem Stadium in Cairo.

“The preparations are going on well. We lost our first match because my players were a bit nervous, but I have talked to them. We will need to score early goals and maintain the tempo of the match till the end, that’s the strategy going to our next match,” said coach Okere.

On her side, former Werder Bremen and Koln midfielder who is also Kenya Women Football Administrator Doreen Nabwire expressed her disappointment after the loss urging the players to be more confident going into the match.

“I watched the whole match and for real we lost because we feared the opponent. They were cleaver enough to score an early goal before even our team settled and they defended well till the end.

“I also watched part of Asfar match when they were playing River Angels and they play similar to CBE of Ethiopia which we defeated to qualify this competition. I’m urging the team to be confident and we can get a win.”

This is the first CAF Women Champions League tournament ever, in which Vihiga re representing the Council of East and Central Africa Football Association (CEACAFA) zone.