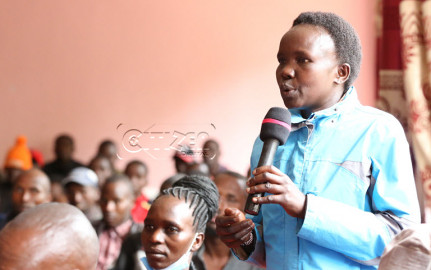 Athlete Sarah Yano makes her point during an athletics meeting.

Athletes have faulted both the county and national governments for failing to invest in the sportsmen.

According to long distance athlete Peter Gushu, athletes have been neglected despite bringing honour and glory to the country.

Gushu said the situation has led to some athletes especially in the North Rift region opting to compete for neighbouring countries such as Uganda.

“Both governments have let us down as athletes despite our country being an athletics powerhouse. We have seen athletes who win medals in major championships yet they are not rewarded accordingly compared to other countries.

We have so many retired athletes and they have not been recognised by even having streets in major towns named after them,” said Gushu.

Marathoner Sarah Yano faulted the government for failing to recognise the contribution of athletes in the country.

“We really ask our leaders to help athletes especially in their training and not just celebrate their victories. The way athletes fly the Kenyan flag high is the way they should be supported also,” said Yano.

“We have a lot of challenges when it comes to training facilities. I train in Kapcherop Elgeyo Marakwet County and we don’t have any stadium yet we have leaders both at the county and national level. I urge our leaders to address the issue of training facilities,” said marathoner Sarah Yano.

Yano also called for the training of more female coaches with the field being dominated by men.

“There are some issues as a female athlete I cannot freely share with a male coach hence the need to invest in more female coaches,” she added.

The nationwide AK forum that commenced earlier this month is set to conclude on Wednesday in Kapsabet, Nandi County.