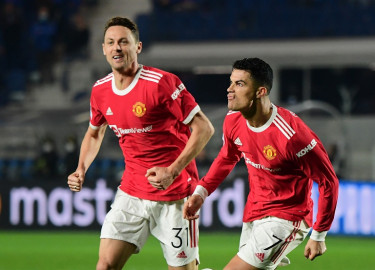 Ronaldo's first brought United level on the stroke of half-time on Tuesday before he fired a stoppage-time equaliser to send United joint top of Group F with Villarreal.

The 36-year-old also scored in comeback victories at home against Villarreal and Atalanta, prompting Solskjaer to compare his impact to that of six-time NBA champion Jordan.

"We all have our roles and responsibilities," Solskjaer told reporters. "Of course Cristiano is a leader in the group but that's what he does, he scores goals.

"We're not happy conceding two goals ... But he (Ronaldo) does provide those moments and I'm sure the Chicago Bulls didn't mind having Michael Jordan either.

Ronaldo, who returned to the club in the summer, has scored nine goals in all competitions this season, five of those in the Champions League.

"For me, Cristiano is getting better and better for us. He’s feeling better," Solskjaer added.

"You know he's not had a proper pre-season, now he is getting better and better and he's feeling up to speed now."