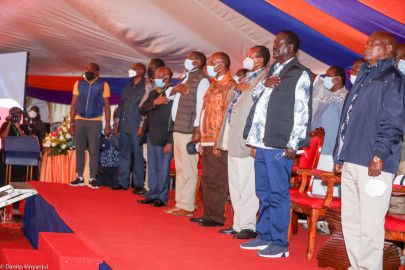 Leaders from the Central Kenya region have Jointly endorsed ODM leader Raila Odinga as the leader fit to succeed President Uhuru Kenyatta in the 2022 presidential elections.

Speaking at the conclusion of Mr. Odinga's two-day Azimio tour in Nyeri County on Saturday, the leaders drawn from the Mount Kenya region affirmed in unison that Odinga was well positioned to lead the country.

“We the leaders of Counties of Central have met and agreed to rally our people towards the  political direction that is sure to secure their future and that of the Kenyan nation as a whole,” said the leaders in a statement read by Murang'a Woman Rep Sabina Chege.

“We will unanimously support the agenda of shared prosperity and inclusivity being championed by the Raila Odinga through Azimio la Umoja and the vision of our nation founded in the utu, umoja, usawa, usalishaji  and ustawi kwa wote."

The leaders highlighted the key problems affecting the region and boldly stated that Odinga would be entrusted to solve them.

They identified; inequitable allocation of funds, inadequate infrastructures (incomplete projects), unemployment of the youth and prevailing hostile business environment and trade which they said is the region’s major activity.

Leaders stressed on the issue of agriculture and SMEs as the region’s primary source of income which they entrusted Odinga to address as soon as he rises to power.

Other leaders present in the event expressed their unshaken confidence on the leadership of 'Baba' saying that he would lead the country to a new era of economic prosperity.

"In Baba there is hope. We shall have a new nation conceived in liberty and dedicated to the proposition that all men and women are equal and tribeless," Embakasi MP Babu Owino said.

In his address, the former premier highlighted the pillars of his economic agenda based on infrastructural development, education, health, eradication of poverty and fostering economic growth.

Odinga narrated the history of Kenya since independence pointing out key factors of national unity democratic parties which united Kenyans such as KANU.

He bashed his competitors for giving handouts to the youth to acquire popularity while at the same time in an ironical way, advising the youth not to refuse the handouts but to accept them gladly as theirs.