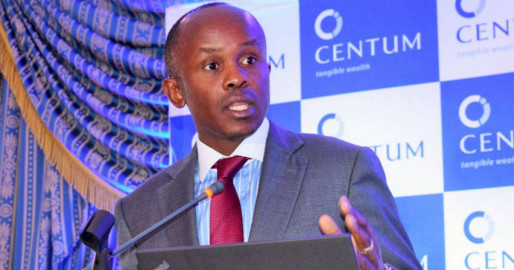 The Centum Investment Group has trimmed its half-year loss to September by 67 per cent to Ksh.662 million from Ksh.1.98 billion last year.

The reduced loss-making is attributable to improved trading and investment income in the period.

The Group’s financial services have meanwhile posted a five-fold growth in profitability to Ksh.210.5 million after a strong performance by Sidian Bank and improved margins by Nabo Capital and Zohari Leasing.

Centum’s real estate business has however remained in loss-making but has trimmed its six months real estate investment losses to Ksh.141.8 million from Ksh.279.8 million.

Its Two Rivers Development Group has similarly reduced its losses by 66 per cent to Ksh.342.4 million.

Centum has however spent Ksh.721.4 million in impairment provisions on assets leaving the Group’s bottomline in the loss-making territory at the half-year stage.

Centum Group Managing Director James Mworia however anticipates a continued rebound of the Group’s business segments into the second half of the year which runs to March 2022.

“We have seen improved performance in the first half from the various business segments as they recover and the economy rebounds from the impact of the Covid pandemic. We are optimistic about the second half of the year as we continue to execute on the recovery plans across the various businesses,” he said.