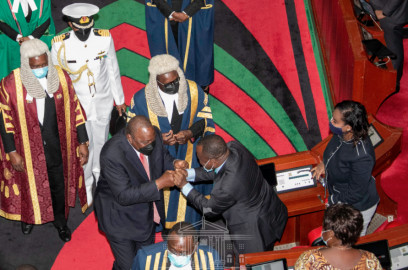 President Uhuru Kenyatta at Parliament buildings for his State of the Nation address. PHOTO | PSCU

Political leaders across the divide have expressed mixed reactions in regard to President Uhuru Kenyatta’s eighth State of the Nation Address in Parliament on Tuesday.

Leaders allied to Deputy President William Ruto criticized the address saying it did not live up to the people’s expectations while those allied to ODM leader Raila Odinga said it was well structured to address the challenges and offer solutions in the country.

Garissa Member of Parliament Aden Duale censured the Head of State saying the statement was a violation to the legislative arm of the government.

“The president has missed the point; the State of the Nation address is a constitutional function anchored in Article 132,” he stated.

“It says fundamentally the president is supposed to address the nation on his government’s international obligation, on matters of national security in the last one year and more so on how his government has complied with the various national values as entrenched article 10.”

He further accused President Kenyatta of arriving late to the Parliament buildings, which he said is a further violation of the law.

“He went out of the way and in fact, he came at 3:15pm contrary to 2:30pm timeline set for the legislature. What the President did today was to abuse the legislature,” Duale said.

“He talked about tea prices; the people who wrote the speech today, missed the point because tea prices are actually not in the highest, farmers are crying out this year because they are fetching very low prices.”

Suna East MP Junet Mohammed on the other hand lauded the president’s speech terming it one of Uhuru’s best speeches “since he started addressing Parliament.”

“Uhuru put into context everything his administration has achieved. Specifically, the issue he talked about was political stability and he said what is happening now is going to happen in the future,” Junet said.

“He knows that this country is going to be in safe hands after him which I know in my view, is Baba.”