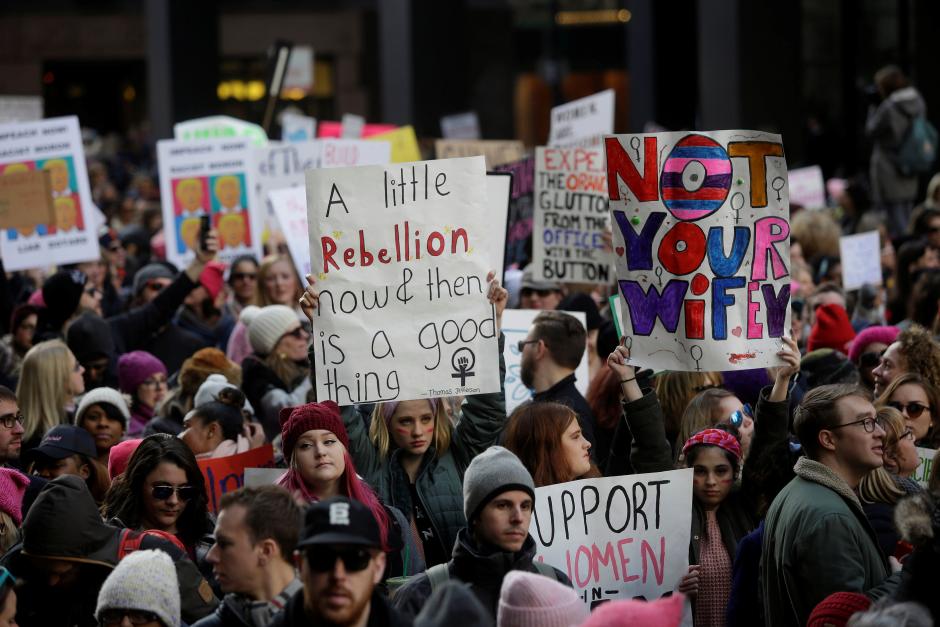 Hundreds of thousands of women and their male supporters turned out on Saturday for the second Women’s March, a nationwide series of protests against U.S. President Donald Trump marking the end of his tumultuous first year in office.

The coordinated rallies in Washington, New York, Los Angeles, Chicago and about 250 other cities featured speakers who blasted Trump for policies that many said hurt women and urged voters to turn out for congressional elections in November. Sister rallies were staged in cities overseas.

“Your vote is the most powerful tool at your individual disposal,” actress Eva Longoria told the Los Angeles rally. “Everybody who has the privilege of voting must do so.”

Trump responded on Twitter by touting what he said were economic gains of the past year that benefited women.

“Beautiful weather all over our great country, a perfect day for all Women to March,” he wrote. “Get out there now to celebrate the historic milestones and unprecedented economic success and wealth creation that has taken place over the last 12 months. Lowest female unemployment in 18 years!”

Joblessness among women was 3.7 percent in December, below the overall U.S. unemployment rate of 4.1 percent, according to the Labor Department.

Even so, Katie O‘Connor, a 39-year-old lawyer from Knoxville, Tennessee, who traveled to Washington’s National Mall, said she wanted Trump out. “I don’t believe this administration is going to do anything good for women,” she said.

Many of the protesters wore pink knit “pussy hats,” which were created for last year’s march as a reference to a comment made by Trump about female genitalia. The caps quickly became a symbol of women’s empowerment and opposition to the new president in the early days of his administration.

Saturday’s march follows what many see as a pivotal year for women’s rights, with the rise of the #MeToo and #TimesUp social media campaigns against sexual harassment and misconduct. The movements sprang up after a string of scandals involving powerful men in Hollywood, Washington and elsewhere.

Many of Saturday’s speakers highlighted the theme of sexual assault, urging all Americans to fight back against what they see as a culture that tolerates the mistreatment of women.

“When it happens to a girl, it often means that she has to stand alone,” actress and model Olivia Munn said in Los Angeles, referring to sexual assault. ”We will always support you, stand beside you, so you don’t have to stand alone.”

Los Angeles Mayor Mayor Eric Garcetti estimated the crowd at 600,000, and that it was largest march in the country.

In Washington, Democratic leaders addressed a gathering that appeared much smaller than the massive crowd that flooded the nation’s capital on Jan. 21, 2017, the day after Trump’s inauguration.

“So while we have this president celebrating his one-year anniversary, let’s give him an ‘F’ (grade) for his performance,” House of Representatives Minority Leader Nancy Pelosi said while flanked by fellow Democrats. “We don’t agonize, we organize.”

An estimated 5 million people participated in the nationwide rallies in 2017, making it one of the biggest protests in American history.

In Chicago, thousands of mostly female marchers gathered in Grant Park, with many carrying protest signs with slogans such as “Strong women raising strong women.”

Michelle Saunders, 41, a software saleswoman from Des Plaines, Illinois, came to the rally with her 14-year-old daughter, Bailey. They attended last year’s march.

“We are unhappy with the current administration and what it stands for, and want our voices to be heard,” Saunders said.

Since the 2016 presidential campaign, Trump has had sharply lower approval ratings among women than among men. A Pew Research Center poll in May showed 46 percent of men approving of Trump’s job performance, while only a third of women did.

March organizers hope to build on the energy felt by Trump opponents after his surprise election victory and channel it into gains for progressive candidates in November’s midterm elections, using the theme “Power to the Polls.”

Activists say Trump’s policies rolling back birth control and equal pay protections have propelled many women into activism for the first time. In Virginia state legislative polls, 11 of the 15 newly elected Democrats were women.