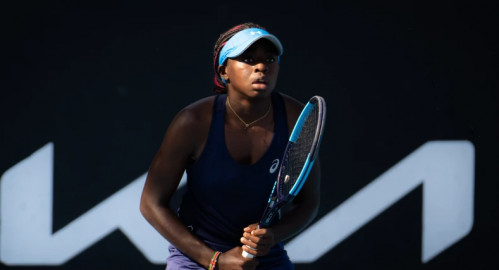 Angella Okutoyi's debut at the Australian Open Junior championships was a marvel, beginning with a hard-fought 2-1 victory over Federica Urgesi of Italy in the main draw of the girls singles on Sunday.

Her rise to the top has been nothing short of spectacular, with back-to-back victories over formidable opponents and a bright future ahead of her.

After defeating three-time former champion Shufaa Changawa 6-1, 7-6 at Nairobi Club in 2018, Okutoyi, who is ranked 60th in the International Tennis Federation (ITF) Junior Rankings, became the youngest player to win the Kenya Open at the age of 14.

Okutoyi won the Africa Junior Championship on Clay Court (AJCCC) Under 14 singles in Algeria in 2018, and then went on to win singles and doubles at the ITF East African Under 18 Junior Circuit, ITF Nairobi Junior Open, and Eastern Africa Zonal Championships Under 16 in 2019.

She won the Africa Junior Championship in 2021, and for the first time in 2022, she competed in the Australian Junior Open Championship.

He next challenge is against Australian Zara Larke who is currently ranked 263rd.

She is the second Kenyan, after Paul Wekesa to play in the Australian open.  Wekesa was ranked at position 100 globally in May 1995, during  the peak of his career.