Kenyan amputee team one win away from World Cup 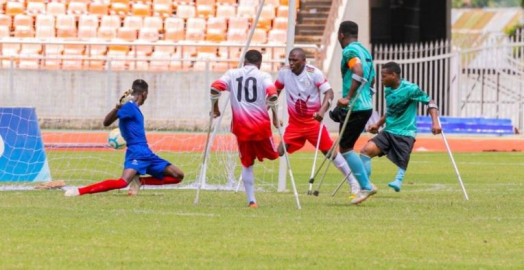 The national amputee team is one step away from reaching the Amputee World Cup after defeating Egypt 5-4 in a pulsating fifth place playoff at the ongoing African Championships in Tanzania.

Kenya twice came from behind in the victory with Turkey-based striker Mohammed Munga hitting a hat trick and Nicholas Keiyo notching a brace to carry their side over the line.

Kenya, seeking a third straight appearance at the Amputee World Cup, will now face Morocco on Saturday in a battle for Africa’s final slot for global championship that will be held in Turkey.

Keiyo was making a return to the team after missing the quarter-final due to card suspension where Kenya suffered a 4-0 defeat at the hands of Ghana.

World champions Angola as well as Liberia, Ghana and hosts Tanzania have already sealed their qualifications.

Kenya participated in the last two editions; 2014 and 2018 both in Mexico.

In 2018, they were defeated in the round of 16 as Angola won the tourney against power house Turkey through penalties.

The next Amputee Football World Championship will be held in Turkey in October 2022.