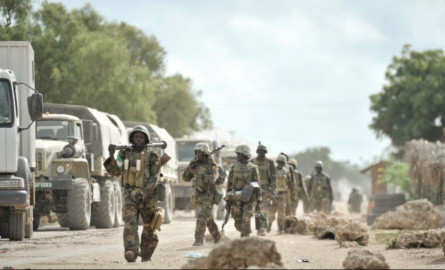 A 15-member team of the African Union Peace and Security Council met with senior Somali officials in Mogadishu on Tuesday and discussed the future of AMISOM peacekeeping operations. Tensions are running high after the Somali government expelled an AU deputy special envoy last week.

The federal government of Somalia and the African Union peacekeeping mission, AMISOM, have been at loggerheads over a proposed reconfiguration of the 14-year-old peacekeeping force.

Under the proposal, more countries would send troops into Somalia to join the 20,000 already contributed by six AU members.

The Somali government is against bringing more foreign troops into the country.

"The hybrid option that you chose brings more troops while the Somali transitional plan we would like to have reduces the current force, this is the biggest difference we have," Abdulrazack said. "We want less force, not more. We want much more effective approach to combating terrorism and strengthening Somali forces.”

Ambassador Mohamed Gad of Egypt, who led the delegation from AU headquarters, reiterated the continental body’s commitment to enhancing stability in Somalia, despite the differences over the mission.

"The physical presence of the council in its full composition is an expression of the commitment of the Peace and Security Council to Somalia to the engagement of the African Union and its mission AMISOM at this critical juncture,” said Gad.

Last week, Somali officials expelled an AU deputy special envoy, accusing him of activities incompatible with the mandate of the AU mission in Somalia and the country’s security strategy.

AMISOM was set up in 2007 to help the Somali government withstand the threat posed by militant groups such as al-Shabab.

The mission is operating under a United Nations mandate that runs out on December 31.