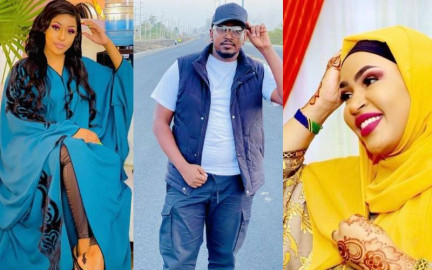 Just hours after businessman Jamal Roho Safi turned to social media to wish his ex-lover Amber Ray a happy birthday, his first wife Amira has claimed she is ready for a divorce.

“As from today, kindly consider me a single mum. Jamal Roho Safi, get that divorce paper ready. I am not going to allow you to disrespect me again,” Amira wrote on her Instagram stories.

Early Thursday, the Matatu entrepreneur shared a video on his Instagram feed, and on his stories showing snippets of photos playing over Nvirii's Birthday song.

"Do what you want to, be who you want to, forgive and let the karma flow," socialite Amber Ray reacted with her favourite lyrics. "Thank you very much, Chairman."

Perhaps scorned, Amira vented her rage on Instagram, saying, "It gets to a point where enough is enough."

"On November 4, I got the courage to stand up for myself. It’s something I should have done a long time ago but I didn’t have the courage to,” Amira wrote.

Amira said she's focused on being a better version of herself while caring for her children and running her business.

“Today is a breaking point for me, and I hope this will also give you courage to leave whatever has been holding you back,” she wrote.

The latest comes days after Amber Ray and Jamal publicly announced that they were no longer an item and were now only friends and business partners.

Jamal and his first wife Amira, met back in high school; they would go on to get married.

They have two boys together.

In late 2020, popular blogger Edgar Obare exposed him for having an affair with socialite Amber Ray and released several pictures of the two looking all lovey dovey.

This precipitated a bitter online war between the two women who have been on an on and off spat.