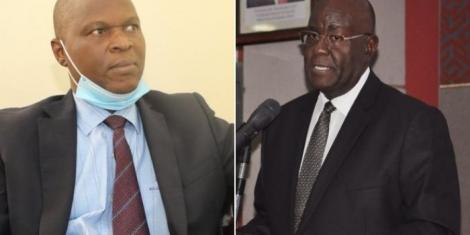 The Directorate of Criminal Investigations (DCI) has a response, claiming that a total of Ksh. 6 million was seized during a raid in which two Judges were arrested in Nairobi

In an affidavit filed in court , Chief Inspector Felix Karisa Banzi officer says that they recovered USD 50,000 from an unidentified lady in Justice Aggrey Muchelule’s chambers and a further 7,000 USD from Justice Said Chitembwe.

The two judges were listed as the first and second interested parties in the case filed by Kenya Magistrates and Judgeds Association. .

The responses are with regards to the case in which KJMA is challenging the arrest of the two judicial officers.

They obtained orders barring the DCI and DPP from arresting and further recommending charges against them pending hearing and determination of the case.

The matter was mentioned today and the court extended the orders directed that the respondents file their responses within 15 days and serve all parties.

In the court papers, the officer says that he has been investigating complaints where select judges and judicial officers have been accused of corruption.

He says that he received information and complaints that indicated some persons acting as brokers, had approached select judges and judicial officers with a view of procuring favorable judgments and rulings in various matters.

He states that on 21st July 2021 at around 3 pm, he was provided with further information from one of the complainants in relation to their complaint adding that the information was to the effect that a series of meetings between certain judges and the brokers a figure of 7 million shilling was arrived at and the bribe was to be delivered to the residence of a judge at 19;00 hours.

“However the stated time and venue were abruptly changed. The meeting was rescheduled to the next day at 07:45 at chambers 235 within Milimani law court.

“From the above it is clear for DCI to obtain a search warrant in time for the stated meeting,” the officer adds.

The officer has also dismissed allegations that the two judges were arrested.

He says that on the material days when information was received that the exchange was about to take place but at chamber 230 belonging to Justice Aggrey Muchelule claiming that the meeting was being facilitated by Justice Said Chitembwe.

He says that the DCI is undertaking lawful and legitimate investigations into grave allegations related to corruption adding that the investigations cannot be claimed , by any stretch of imagination as an encroachment on the independence of the judiciary.

The officer says that once the investigations are finalized, appropriate action will be taken in consultation with all relevant agencies and authorities as provided by the law.

“The application herein is an attempt to stifle and frustrate the DCI in performance of his constitutional mandate,” he says.

The case will be mentioned on the 18th of October this year.