'I have always believed in myself,' Trio Mio speaks on his rap journey 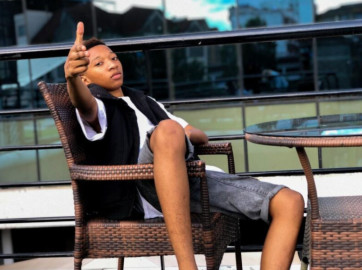 Teen rapper Trio Mio now says he has always had a deep sense of belief in himself since he started his music career in 2020.

The youngster rose to fame during the COVID-19 pandemic period with the hit song ‘Cheza kama wewe' featuring superstars Mejja, Exray, and NellyTheGoon

In an interview on Citizen TV’s 10 over 10 show on Friday, Trio stated that the people around him have at all times supported him from when he ventured into the industry.

“From when I started doing music, I have always believed in myself. With hard work, I know I will grow to higher places. I have a very strong support system as well,” he said.

Trio, who is a Form Three student, was recently among musicians who performed at ODM leader Raila Odinga’s Azimio La Umoja convention at Kasarani on December 10, 2021.

As the year comes to a close, Trio Mio addressed some of the plans he has for this December with an upcoming solo hit set to drop soon.

“I am closing the year with a bang. I am planning to release a song around Christmas,” said Trio.

Trio Mio is loved for his flow and ease with which he drops bars accompanied with a spellbinding voice that puts him among Kenya’s A-list artists.

Among other old school Kenyan music heavy hitters, Trio was featured in a special project done in honor of the late legendary musician E-Sir.

The artist has most recently drawn comparison to E-sir, a lyrical genius who died in his prime.