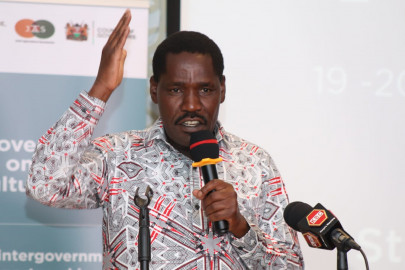 Agriculture Cabinet Secretary (CS) Peter Munya now says that there is a deal in place for a section of Kenyan farmers to supply potatoes to fast-food chain restaurant KFC.

According to the CS, the said farmers are ready and well equipped to produce the high standard potato varieties that KFC demands when sourcing ingredients to make chips for its customers.

“We have actually agreed with KFC to work together. They have identified the people they want to work with to start rolling out particular varieties that they require and they have partners who do it the way they want it done and I think there is a team already working on the rollout,” the CS said in an address in Nairobi on Wednesday during the 4th intergovernmental Forum for Agriculture.

“We have come up with a plan on how to grow those particular varieties that KFC requires and to ensure that we have varieties that please the palate of those interested in KFC chips.”

While underscoring that he appreciates other potato varieties cultivated in Kenya, the CS dismissed claims that the country’s potato sector was in a crisis owing to the recent chips shortage debacle experienced at KFC.

The CS similarly urged farmers who will not be supplying KFC with potatoes to continue cultivating the food crop, citing that only 5 percent of the country’s cumulative potato harvest is used in making chips as such farmers have many alternative opportunities to sell their produce.

The development comes after KFC, in early January, made a statement saying there could be an opportunity to source potatoes from local farmers should they meet its global standards.

Prior to the statement KFC had announce that it had exhausted its chips stock post-New Year’s celebrations prompting a heated discussion on social media as to why the eatery prefers importing potatoes instead of sourcing for them locally.