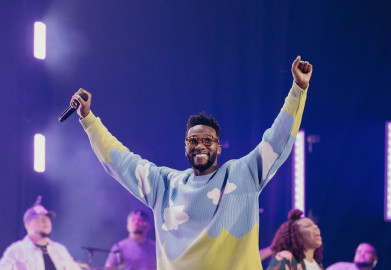 Famed American evangelist-cum-author Michael Todd is under fire after a video of him rubbing his spit on a congregant went viral.

During the live broadcast of Sunday’s service, Todd, a lead pastor at the Transformation Church in Tulsa, Oklahoma, was seen spitting on his hand and then rubbing the saliva on the male congregant.

The churchgoer had volunteered to step on the dias to aid Todd in expounding how “receiving vision from God might get nasty.”

“How you just reacted,” the evangelist says in the video amid buzz from the congregation, “is how the people in your life will react when God is doing what it takes for the miracle.”

Todd has since broken his silence on the incident. He issued an apology saying he did not mean to “distract others from God’s word and the message of Jesus.”

“I apologize for my example being too extreme and disgusting!” said the pastor in a message posted on his Twitter account on Monday.

“We want to help people, we want people to see Jesus… I am passionate about that so much that I try to do extreme things so that people get it,” he explained.

“When Jesus spit on that man, he was blind and then he could see.”

Todd's supporters have, however, stood their ground claiming their pastor’s actions are justified.

They said Todd did not need to bow to pressure and apologize as the backlash was just the work of the enemy.

“​​If you’re doing what God has instructed, there is no apology necessary. Keep working,” one wrote.

Another Todd follower said: “NO!!!! we are not apologizing to people who don't read the bible... Nor are we apologizing for the way the media is making it to be... Can't believe the work of the enemy right now.”

Todd is the author of the New York Times' Bestselling book Crazy Faith: It's Only Crazy Until It Happens.

In March 2020, he hit the headlines when he collaborated with the Oklahoma Governor to hold a prayer day to protect the state against the COVID-19 pandemic.