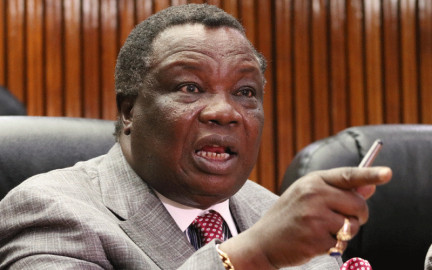 Castigating him as a traitor following his newfound union with Deputy President William Ruto on Sunday, Atwoli said anyone allied to Mudavadi will be treated as patients of what he termed as ‘political Ebola.’

“I would like to remind Kenyans that anyone associating with Musalia in western Kenya will NOT be elected in the region come August because such characters will be assumed to have contracted political Ebola and thus the voters will give them a wide berth,” said Atwoli in a statement on Monday.

“We will not, we must not, and we will never allow our people to be auctioned by political merchants.”

Atwoli further accused Mudavadi of being too obsessed with power, claiming the ANC leader would do anything to gain authority, “including shaking hands with the devil.”

“Kenyans were treated to an Oscar-winning show yesterday when Mudavadi invited Ruto to his NDC without the knowledge of his other OKA principles. How then can Mudavadi talk about the politics of betrayal, dishonesty and deceit while he himself cannot be trusted?” posed Atwoli.

He also distanced himself from Mudavadi’s claims in his scathing Sunday speech that the COTU boss is corrupt, saying issues in the Labour sector are beyond his docket.

“Mudavadi is so naive that he doesn't seem to understand how the labour movement in Kenya works and that the Secretary General of COTU (K) is not the Minister in charge of Labour nor Treasury to blame me for the performance of the Labour sector and the economy,” he stated.

In his speech, Mudavadi had attacked the COTU leader over alleged corrupt leadership of the labor sector which he said was in shambles and 'inviting ICU'.

“Clueless and clowning self serving leadership Under the labor sector,” Mudavadi described it as his supporters chanted ‘Atwoli must go’.

Following the convention, Atwoli was among the first people to castigate Mudavadi.

The fierce Azimio La Umoja crusader, through his Twitter account, termed Mudavadi’s alliance with the DP as an embarrassment to the Luhya community.

“Befriending Ruto is not the key to the Presidency. He has ashamed the Luhyas by allowing Ruto to fund his NDC,” wrote Atwoli, promising to ‘fully respond’ on Monday.