‘I was body-shamed by Aisha Jumwa as Ruto watched,’ Ngirici now says 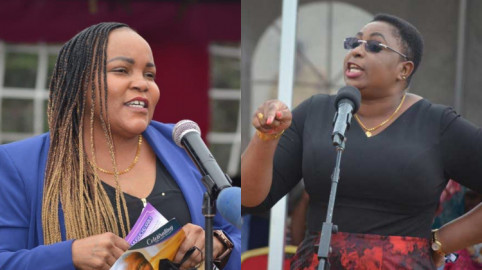 The Ruto defender-turned-critic has accused Malindi MP Aisha Jumwa of body-shaming her during her time at UDA, further admonishing the DP for his complicity amid the alleged suppression.

“I was humiliated and body-shamed by the likes of Aisha Jumwa but Ruto never uttered a word,” Ngirici was quoted as saying by The Standard on Sunday.

This, according to the Kirinyaga gubernatorial aspirant, is why she cannot return to UDA even if they offered her a direct ticket to contest for the seat.

“For this reason, I can never go back to UDA even if I was given a direct ticket,” she said.

She further claims that other leaders have had enough of mistreatment at the party and will be soon breaking away.

“From NorthEastern to Mt. Kenya region, I am in communication with leaders who have informed me they are waiting for the opportune time to move out of the party,” said Ngirici.

Upon Governor Anne Waiguru’s move to UDA in October, Ngirici started expressing unease at the camp and announced that she was taking some time off rallies to self-reflect and strategize on her next move.

She, however, denied that her trouble at UDA was related to the Kirinyaga governor but instead ‘bullies’.

“My issues are not mainly because Waiguru joined UDA but the bullying which is happening in the party,” said Ngirici then.

​​She claimed that some unnamed people in the TangaTanga team had cyberbullied her and even dragged her husband into politics.

“At one time I was insulted in the TangaTanga WhatsApp group where Ruto is. My husband too was dragged into it and called names but he was not in the group to defend himself,” said Ngirici.