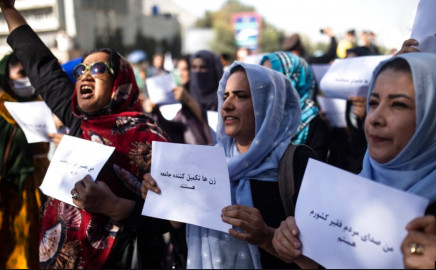 Afghanistan’s Taliban government Friday issued a decree on women’s rights, saying women cannot be married off against their will or given away in exchange for peace or to settle feuds.

The religious directive comes as the hardline Islamist group, which took over the conflict-torn country in August, faces international pressure to commit to upholding human rights, especially those of women.

“Adult women's consent is necessary during Nekah/marriage. No one can force women to marry by coercion or pressure,” said the decree, released to media by Taliban spokesman Zabihullah Mujahid.

The Nekah is the Muslim wedding ceremony.

“A woman is not a property, but a noble and free human being; no one can give her to anyone in exchange for peace deal … or to end animosity,” it said, adding that widows must have a share of their late husband's property.

Mujahid said the Taliban leadership has instructed all relevant Afghan institutions, religious scholars and tribal elders across the country to enforce the rules and promote public awareness about them to prevent “the ongoing oppression” against women.

The decree asked the Supreme Court to issue instructions to all courts across Afghanistan to take into account the rules when deciding cases related to women’s rights, especially those of widows.

The Taliban edict made no mention of girls’ education or women being able to work outside the home.

The ruling Islamist group allowed boys to return to school in September, but girls in many Afghan provinces are still waiting to resume their classes, a situation strongly criticized by domestic and foreign observers.

Taliban leaders have said all Afghan girls will be able to return to school by the new education year starting in March, saying they are making arrangements to put in place a “safe environment” for girls’ education and to make sure there are enough funds available to pay over 200,000 teachers.

The Taliban had previously ruled Afghanistan from 1996 to 2001, banning women from leaving the home unless accompanied by a male relative and wore a burqa or veil, covering their full face and head. Young girls were also barred from receiving an education.

Since their return to power in Kabul more than three months ago, the Taliban have repeatedly assured the outside world that they would not reintroduce their previous hardline rule in the country.

Roya Rahmani, former Afghan ambassador to the United States and a rights advocate, responded to the Taliban edict, saying it could be an attempt to encourage the world to work with the new rulers of the country.

“This is the most direct and bold statement ever issued that necessitates women’s consent to marriage, bans the practice of Baad, and talks about inheritance,” Rahmani wrote on her Twitter account.

Baad is a traditional practiced in certain parts of Afghanistan in which a female is given to the victim’s family by the criminal’s relatives as compensation to settle a dispute.

“The decree in its essence is a great step forward, if practiced,” Rahmani said. “In an environment in which women don’t have access to education, employment, and civil rights, traditional power wielders and religious authorities will be interpreting and deciding how it will be enforced, if at all."

The United States and European countries have frozen billions of dollars in Afghan central bank funds and non-humanitarian aid since the Taliban takeover of the country.

The sanctions have plunged Afghanistan into an economic upheaval, where millions of people already face acute hunger due to years of war, high levels of poverty, and a prolonged drought.

The release of the funds and granting diplomatic recognition to the new Afghan rulers have been linked to women’s rights and governing the country through an inclusive political system, where all segments of the Afghan society have their representation.

Taliban leaders in talks with U.S. officials in Qatar earlier this week again asked for those funds to be released, defending their government as representative of all Afghans.

“This government is not inclusive. There are no women in it. At the decision-making level, there are no youth and experts. Those who are not Taliban, are not part of the government. The rights of women have yet to be clarified.