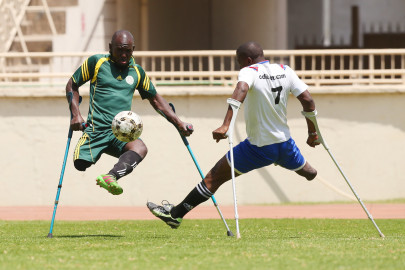 The federation secretary general Peter Oloo said they roped in the services of the former Kenyan international thanks to his rich experience in local football ahead of the African championship slated for November 27 to December 4 in Tanzania’s commercial capital Dar es Salaam.

“We’re currently in a residential training with the support of the government which has also promised to help us participate in this competition without any problems in Dar es Salaam and if possible, return with the cup to Kenya. The preparations are well organised and we’ve brought on board Musa to fine tune our skills because he is among the best in Kenya,” Oloo told Citizen Digital.

Oloo is brimming with confidence Kenya, which is ranked second behind Angola in the continent, will triumph in the eight-day championship and qualify to the 2022 Amputee World Cup to be held in Turkey.

“The boys are upbeat and we’re ready to put up a spirited fight against the other opponents because our eyes are on the ticket for the World Cup. Going by the levels of the quality I’ve seen there is no doubt we will punch equal to our weight,” he added.

Former Stars and Inter Milan midfielder McDonald Mariga oversaw the national selection of the team in a two-day rigorous trials held last month at the City Stadium in Nairobi which attracted teams from 11 counties.

Kenya is in group B against defending champions Angola, Rwanda and Zanzibar while record holders Liberia, who will chasing their fourth title, will be up against Cameroon, Ethiopia and Gambia in group C.

The draws were held late last month in Tanzania by top officials of the African Amputee Football Federation (FAAF), led by the president, Rev. Amartey Richard.