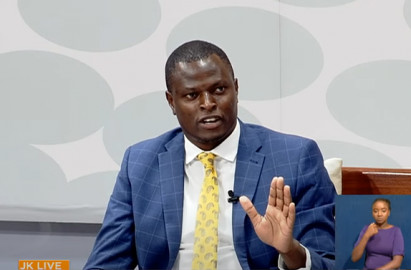 Kiharu MP Ndindi Nyoro has insisted that Kirinyaga Governor Anne Waiguru’s decision to join the Deputy President William Ruto-led United Democratic Alliance (UDA) was spurred by the party’s ideology and beliefs which she resonated with.

According to Nyoro, UDA’s bottom-up policy is well exemplified, practical and easy to understand and implement.

“The bottom-up policy is well epitomized, easy to understand and practical where we want to move as a Kenyan people by including everyone to be a participant of the growth of our economy, so Anne Waiguru read the ideology of UDA and understood it,” said the MP.

Nyoro claimed that Governor Waiguru’s decision was also informed by the residents of Kirinyaga who he said have been vocal about which party they want to represent them in the area.

“Politics is local. Anne Waiguru saw the direction of people of Kirinyaga and made the right decision. You have to walk together with your people and you cannot walk in isolation,” he argued.

The legislator consequently stated that Waiguru will not be the only politician who will jump ship to UDA ahead of the 2022 General Elections.

“We are in the transfer period in terms of politics and every politician has to look at their interest and that of the people they represent. In terms of UDA, you only highlighted the issue of Waiguru, but if you go backwards you will see that we have been receiving defectors from various political parties,” Nyoro said.

“UDA is a new party. It is not a parliamentary party in terms of definition because it is new but in terms of the membership of elected leaders subscribing to UDA, we have around 155 MPs in the National Assembly and Senate. The other party that is second is actually ODM at around 70, then there are the remnants scampering for safety and we will be receiving more in coming days.”

Waiguru had, in the recent past, been coy about where her political allegiance going into the 2022 showdown would.

She on Monday however joined DP Ruto’s UDA party after meeting with him at his residence in Karen, alongside a host of Kirinyaga Members of County Assembly.

Waiguru insisted that the Mt Kenya region is dissatisfied with how the ruling Jubilee Party has been run over the last five years.

“If I ran today on a Jubilee ticket and someone else ran on a different party, even if people felt I had performed, it would be hard to convince them to vote for me,” Waiguru said last month.