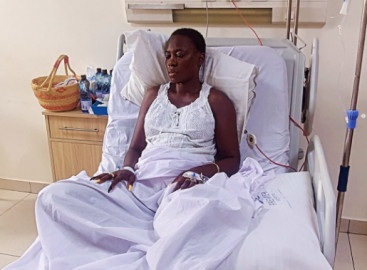 Kenyan musician and businesswoman Akothee has been admitted to hospital, again.

Taking to social media on Wednesday, Akothee announced that she was admitted on Saturday, December 11.

Akothee wrote that she cannot describe what is ailing her, adding that she is now strong enough to at least be able to lift her head.

“I can't describe what is eating me up, but it keeps doing it's thing at the worst moment of time. We have been here since Saturday and this is our Jamhuri celebration. Today I can lift my head,” she wrote on Instagram.

The Akothee Safaris CEO went on to acknowledge her lover Nelly Oaks saying she has been admitted to hospital five times and he has been there with her every single time.

“5th time admitted in hospital and he is here with me,” she stated.

Just one week ago, Akothee’s daughter and social media personality Rue Baby was compelled to cancel her graduation party after her mother fell ill.

“@akotheekenya this is addressed to you. I know it comes as a surprise but you are not well yawa mama ni. Can someone just help me tie her up so that she gets better first…we can always do party later.” Rue Baby posted on Instagram.

The award-winning singer was a few weeks ago admitted to hospital due to a pinched nerve on her neck that affected her arm.

She was, however, discharged after a few days.

“My neck feels overburdened, tired and burning like fire,” Akothee said then.