'Reggae iko half time, it will come back!' Raila Odinga reignites BBI debate 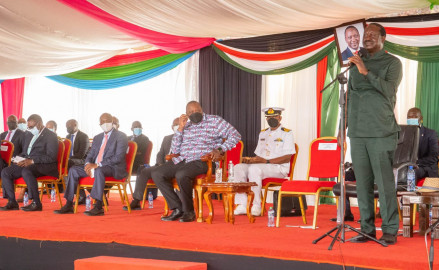 Odinga, who was speaking in Nakuru on Wednesday during the town's designation into a city, said the initiative is on break and will soon return.

"Reggae iko half time, it will come back. Mpira itaendelea," Odinga stated.

The former premier explained the BBI process as an initiative centered on uniting Kenyans, which he said has led to the formation of the ‘Azimio la Umoja’ rallying call in a bid to eradicate tribalism.

"This is why we are promoting Azimio la Umoja which aims to bring our people together. Nakuru is a good example of a cosmopolitan city; almost 42 of our ethnic communities are resident here," Odinga stated.

Citing history, Odinga stated that the importance of Nakuru as a city boasts great milestones in terms of infrastructural developments, promoting diversity and unity for Kenyans.

Odinga invited residents to Nairobi on December 10 where he said Azimio la Umoja would hold a meeting for all  Kenyans urging them to be partners of the dream.

"We will be able to realize the dreams of the founding fathers of our nation; One united country where everybody is a Kenyan and whatever is available we share together as one family," he said.

Odinga's remarks came after President Uhuru Kenyatta during his eighth State of the Nation Address revived the BBI debate while criticizing the Judiciary for nullifying the process that sought to amend the 2010 Constitution.

President Kenyatta emphasized that the BBI process was a popular initiative, saying the courts went against the will of the people and denied the country opportunity to realize much-needed political stability.

"My administration attempted to resolve the constitutional dilemma facing our country. We went to the people and 5 million Kenyans agreed to initiate the process of putting to the vote the First Amendment to the 2010 Constitution,” said the president on Tuesday.

In May 2021, the High Court declared the initiative unconstitutional, ruling that President Kenyatta had no legal authority to introduce a popular initiative to amend the Constitution.

Later, the government and the proponents of BBI lost in their attempt to appeal the ruling in the Court of Appeal.

The Attorney-General has since moved to the Supreme Court to challenge eight findings of the Appellate Court that overturned President Kenyatta's bid to amend the constitution through the BBI process.

The hearing of the BBI appeal case at the Supreme Court is set to begin in January 2022.