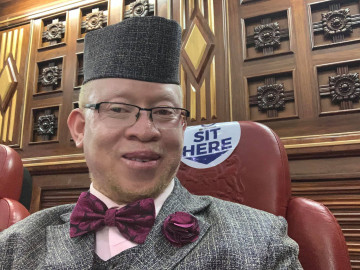 Jubilee Nominated Senator Isaac Mwaura has been readmitted back to the Senate.

Mwaura had lost his seat in May after a lengthy battle with the Jubilee Party, which saw him ejected from the party’s membership.

Sammy Prisa Leshore had meanwhile been put forth by the party as Mwaura’s replacement, but the High Court last week stopped the Registrar of Political Parties from deregistering Mwaura from Jubilee.

The embattled legislator was restored by Senate speaker Kenneth Lusaka on Wednesday.

“The High Court having quashed Gazette notice number 4597 by the Speaker of the Senate that declared a vacancy of a member elected through a party list, thereby removing senator (Dr) Isaac Mwaura as a senator," Lusaka told the house.

"....and further the High Court having quashed Gazette notice no. 4598 dated May 11, 2021, by the chairperson of IEBC which appointed Mr Sammy Prisa Leshore to replace Isaac Mwaura as a member of the senate representing PWDs, I therefore direct that Isaac Mwaura Maigua, CBS, MP, remains as Senator in accordance with the Constitution of Kenya and the Senate Standing Orders."

On February 8, Jubilee Secretary-General Raphael Tuju said the National Management Committee (NMC) had met and deliberated on a report filed by the party’s disciplinary committee.

“The NMC in exercising its mandate provided or under article 7 (2a) of the party’s constitution and relying on other enabling provisions of the party law has expelled the following senators, ” read a statement from the party.

Subsequently, the Independent Electoral and Boundaries Commission (IEBC) issued a Gazette Notice stating: “The deleted Nominee (Isaac Mwaura) stands disqualified as the member to the Senate representing persons with disabilities.”