Blinken warns war-torn Ethiopia is on 'path to destruction,' calls on Abiy to step up to end conflict 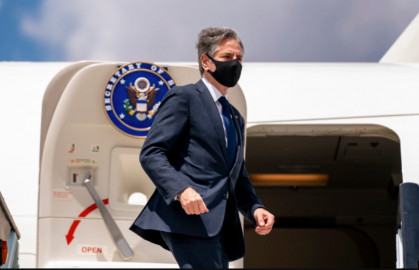 US Secretary of State Antony Blinken warned Friday that the war in Tigray has put Ethiopia on a "path to destruction" that could reverberate throughout East Africa, telling CNN that the country's leader, Abiy Ahmed, must fulfill "his responsibility" and end violence in the region.

Speaking to CNN in Abuja, Nigeria on the sidelines of his tour through Africa, Blinken said "it is imperative that the fighting stops, and the talking starts" and reiterated his call for a long-term ceasefire to enable humanitarian assistance.

"This has to happen as soon as possible -- with every passing day, what we're seeing is an increase in communal tensions that really risk ripping the country apart and spilling into other countries in the region," he said.

Blinken urged Ethiopian Prime Minister Abiy Ahmed to bring the warring sides together and work to "end the violence," adding: "That's his responsibility as the leader of the country."

"There's no military solution to the challenges in Ethiopia," he said. "That's a path to destruction for the country, and misery for the people of Ethiopia who deserve a lot better."

The Biden administration last week sanctioned Eritrea's military and its sole political party for their involvement in the ongoing crisis in northern Ethiopia, with Blinken expressing concern about "the potential for Ethiopia to implode."

But the measures did not target any individuals or organizations directly associated with the Ethiopian government nor the Tigray People's Liberation Front (TPLF), the former ruling party of Tigray, the two main parties to the conflict.

In November 2020, Abiy ordered a military offensive in Tigray to oust the TPLF. The fighting has left thousands dead, displaced more than 2 million people, and given rise to a wave of atrocities that bear the hallmarks of genocide.

A joint report released by the Office of UN Commissioner for Human Rights and the Ethiopian Human Rights Commission earlier this month found that all parties involved in the conflict had "committed violations of international human rights, humanitarian and refugee law, some of which may amount to war crimes and crimes against humanity."