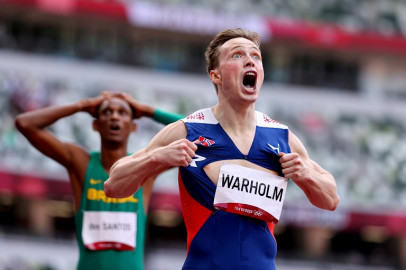 Norwegian Karsten Warholm and Jamaican Elaine Thompson-Herah were named World Athletics Athletes of the Year on Wednesday on the back of astonishing seasons.

He smashed the world record at the Tokyo Olympics. The Norwegian’s time of 45.94sec in winning gold is widely considered one of the greatest Olympic track performances of all time.

Warholm would have had an impressive enough year just on the back of his first race when he finally broke American Kevin Young’s 1992 46.78 seconds world record with a 46.70 run on home soil in Oslo.

That time was obliterated in the Olympic final in Tokyo, however, when he clocked an astonishing 45.94. American Rai Benjamin finished second in 46.17, also well inside the previous world record.

Presenting the award at a virtual ceremony in Monaco, World Athletics President Sebastian Coe said: "We were rendered speechless by your run."

Warholm, 25, said: "I'm so happy for this. When I first saw the time I thought it must be a mistake. It was a very intense race, I always go out hard and never know what's going on behind me.