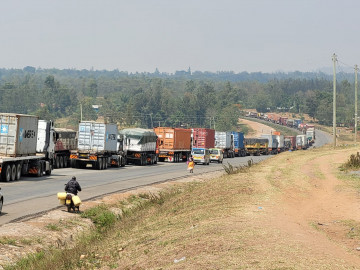 Long distance truck drivers plying the Mombasa-Malaba route have gone on strike to protest a Ksh.3,600 COVID-19 testing fee imposed on them by Ugandan authorities.

This has caused a huge 50-kilometre-long traffic snarl up from Malaba to Kanduyi in Bungoma County, with the truck drivers parking their vehicles on the highway since they cannot afford the fee introduced on December 27, 2021.

According to them, the fee is only required in Uganda and not other neighbouring countries like Kenya and Rwanda which they said conduct the tests for free.

One of the truck drivers, Maguru Mapopo, singled out Ugandan police for harassing them to get tested despite already possessing COVID-19 vaccination certificates.

Those who oblige and get tested, Mapopo said, are not even handed receipts.

"Ugandan police are really harassing us to get tested while we have already been tested and issued with certificates. Some of us have vowed not to get tested because they don't give receipts," he lamented.

He called on President Uhuru Kenyatta and his Ugandan counterpart Yoweri Museveni to quickly intervene and resolve the standstill citing that the stranded truck drivers are already using up the little money they had set aside for their families.

"We have continued to use our mileage money here and have even began borrowing more money as we continue to stay on this jam," stated Mapopo.

Area residents similarly urged the government to come up with a solution quickly, underscoring that the snarl-up is a ticking time bomb as it has also led to the mushrooming of accidents in the area.

They claimed that the traffic exposes them to health risks since the drivers discard their waste on the roads and neighbouring farms which can lead to a Cholera outbreak.