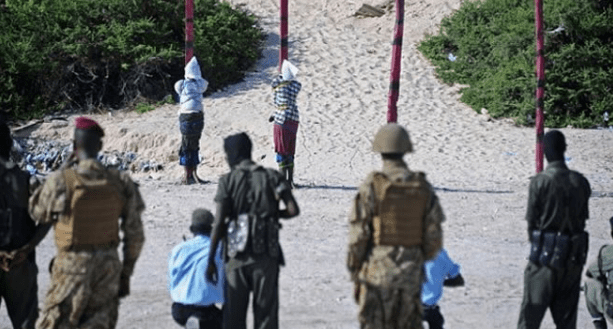 The Somali military has executed six al-Shabab militants without a trial, according to officials and rights activists.

“The men have been in prison for the last five months. They were part of an assassination unit. One of them was caught red-handed as he killed a government soldier, and his arrest led us to the arrest of five others, and finally we executed them,” Farah Mohamed Turba, a Somali military commander told VOA’s Somali Service on Tuesday.

The militants were executed Sunday by firing squad in the town of Bardhere, about 300 kilometers southwest of Mogadishu.

Bardhere, an important agricultural town, was once the main stronghold of al-Shabab in the region, but the group lost control of it to Ethiopian troops in 2015.

Relatives of those executed, who contacted with VOA from the town, described the incident as “a summary execution” carried out by military forces without a fair trial.

Turba said the military was following orders from the Somali defense minister.

“Recently, when the militants killed two Somali senior military generals in a blast, our superior military commanders and the defense minister said al-Shabab militants should be killed (on) sight,” said Turba.

There has been no official statement from the Defense Ministry or the Somali National Army’s chief on these latest executions.

In 2017, Somali military courts and al-Shabab executed about a dozen people, all of them killed in public settings before crowds of between 30 and 300 people.

While executions in Somalia are nothing new, the nature of these latest executions, of taking militant prisoners out of jail and executing them in public without a military court trial, has drawn the attention of human rights activists in Somalia. Al-Shabab has been known not to allow defendants due process before carrying out executions.

“We are criticizing such executions carried out by the military, which are trying cases beyond their jurisdiction and failing to give defendants a fair legal process,” said an activist in Bardhere, who asked for anonymity, fearing reprisals.