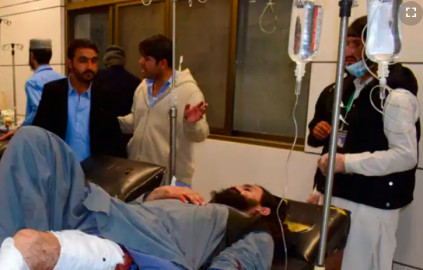 A bomb exploded in southwestern Pakistan late Thursday, killing at least four people and injuring 15 others.

Police said the explosive device was planted in a vehicle parked outside a college in central Quetta, the capital of Baluchistan province, and triggered by a timer.

In a statement released to the media, the provincial health department confirmed the casualties. There was no immediate claim of responsibility.

The violence is often claimed by separatist Baluch militant groups or the Pakistani Taliban, known as Tehrik-i-Taliban Pakistan (TTP), which officials say orchestrates anti-state activities out of neighboring Afghanistan.

Thousands of Pakistanis, including security forces, have been killed in TTP-claimed suicide bombings and other terrorist attacks over the past years.

Pakistan recently engaged the militant outfit in peace talks with the help of Afghanistan’s ruling Taliban, leading to a 30-day cease-fire.

The TTP, however, refused to extend the truce after it expired in early December, accusing Pakistani authorities of breaching terms of the deal. Since then, the group has resumed attacks on Pakistani troops and police forces, particularly in tribal districts next to the Afghan border.