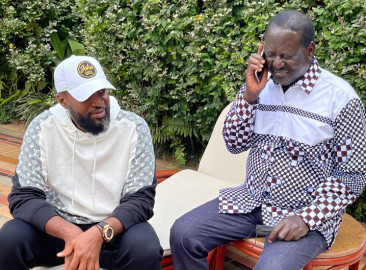 Mombasa Governor Ali Hassan Joho has set aside his presidential aspirations to support his party leader Raila Odinga’s bid in the 2022 polls.

According to Joho, by electing the ODM chief, Kenyans will pave the way for any citizen wishing to assume the top job at State House to do so, regardless of their ethnic background.

“I looked at myself and thought I was ready to vie for the presidential seat but upon further deliberation I realized that we have to clear the way first. I realized that we had to put in place mechanisms that will allow any Kenyan from any part of the country to become President of Kenya if he or she wishes to do so,” said Joho, who was speaking on Saturday during a title deeds handing over ceremony in Likoni.

“After looking around I realized only one person could do so. In the coming elections we should endorse Raila Odinga for presidency. In five years time we will be behind him waiting to succeed him in office.”

“I want to ask the people from the Coastal region to continue supporting the individual you have supported in the last three elections. This time there is clearer chance. Let’s finish the journey that we started,” he said.