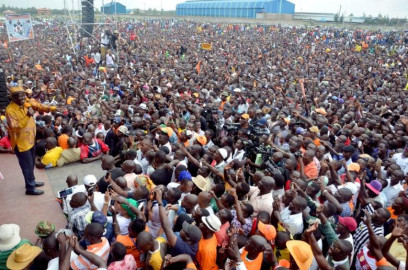 Youth leaders in the country have urged 2022 presidential aspirants to stop making empty promises and deliver on their previous pledges first.

According to the leaders, who were speaking on Citizen TV’s Monday Report show, these promises are barely ever kept and are only mentioned during election periods.

“Most of them are clichés. We have heard them for the longest time now, and I believe it is time that we take the conversation to the next level,” Charles Lemain, Chairperson Kanu Youth Congress, said.

“When you are in government, you are supposed to fulfil promises. You cannot add other promises on top of others you made earlier and have not fulfilled,” Rebecca Moraa, Chairperson Youth Leader Strugglers Movement, added.

These fake promises, the youth leaders say, are a ploy used by politicians to stir people’s emotions just to get their votes.

“Some of the things promised are just supposed to whip emotions. I can see a realist and a populist who are trying to tell you the impossible. When you talk about bringing 100 billion in 2022 and beyond and you have 156 MPs under your party, what is preventing them from walking to parliament and passing a legislation that allows your government to bring the 100 billion today if that money is available?” Moraa added.

“They are just promising fake things and we are used to that. These things are just supposed to make young people vote and when they finish voting everyone just takes their promises under the carpet and that is very wrong.”

Instead of making individual promises, the youth leaders suggest presidential aspirants should formulate and implement policies that guide the leadership of the country and take care of the wellbeing of the Kenyan people in the present and future.

“We need to have very strong policies that will guide the leadership of the country not individuals. I think that is the direction we should take rather than speaking about the promise of 100 billion,” Lemain said.

“Where will you get that 100 billion from? Why are you giving us this cash now and you have been in government? What new thing are you coming to do? The conversation should go a little bit higher in that we should have policies that guide the leadership of the country and not leadership guiding the policies of the country.”

According to the leaders, politicians in general should involve youth in the decision making process of any such reforms or policies in order to ensure their success.

“In the art of politics, lobbying comes first. You can’t make laws without lobbying. This is why we want to be there. We are not trend setters but we want to stand there and tell these leaders what path to take,” Moraa concluded.