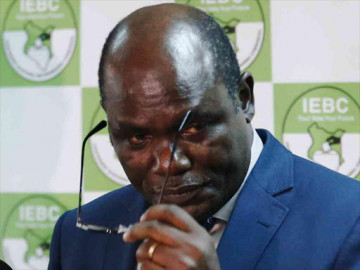 The Independent Electoral and Boundaries Commission (IEBC), a key stakeholder in multi-agency team on election preparation has pulled out of the team boycotting its meeting.

The commission chairperson Wafula Chebukati on Monday, wrote to Interior Principal Secretary Karanja Kibicho communicating the commission's decision to cut ties with the team citing interference with its mandate.

The electoral agency warned that the continued activities by the National Multi-Sectorial Consultative Forum on Election Preparedness was in violation of the Constitution by purporting to direct the commission on how to discharge its duties.

Chebukati stated the commission was independent and not subject to direction or control by any person or authority.

With a meeting of the multi-agency team scheduled for 30th of November to adopt budget lines for various ministries and state departments to help in the election preparation roadmap, IEBC cried foul that the multi-agency team had sidelined the commission while giving stage to other institutions.

The commission protested that the terms of reference for the multi agency team ate into its mandate on planning and preparation of the general election.

The technical working team on elections terms of reference include promote consultations, collaborations, and co-ordination in election preparedness, advise government on the resources required for the general election and co-ordinate electoral assistance by development partners.

The team formed barely a month ago, is required to facilitate the legal reforms required in the conducting the general elections, facilitate the provision of necessary information, communication, and technological infrastructure concerting elections.

Also, in its place is to facilitate the investigation and prosecution of election related offences, expeditious conclusion pending election related cases and receive and consider reports on election preparedness.

A move IEBC warns will dent the credibility of the forthcoming general elections given the heavy involvement of other state agencies encroaching on its mandate.

This, the commission said will derail its ability to deliver a free fair and credible elections.

UDA claimed the two had a political bias. It equally comes just days after UDA petitioned chief justice Martha Koome to recuse herself from the team as it compromises her impartiality when faced with election petitions.

In a rebuttal the judiciary through its chief of staff Rose Wachira dismissed UDA's protest claiming the CJ does not sit in the technical committee on elections but only leads the multi-agency team owing to her seniority.

The judiciary chief of staff said trust in public institutions was an important aspect of good governance and UDA being a political party should promote that trust.