IEBC requirements and key timelines ahead of 2022 General Elections 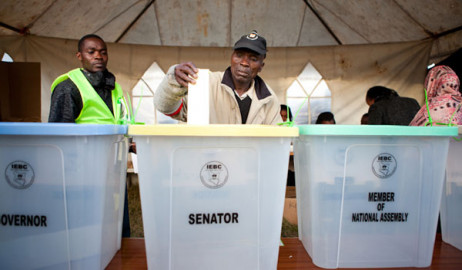 File image of a voter casting his vote at the ballot during a previous election. PHOTO | COURTESY

All eyes will be on Kenya on August 9, 2022 as Kenyans take to the polls to elect their next batch of leaders, among them President Uhuru Kenyatta’s successor following his 10-year spell in office.

Even though the big day lies nine months away, there are crucial events leading up to the General Elections that politicians as well as Kenyans need to keep track of.

These planed events by the Independent Electoral and Boundaries Commission (IEBC) are of vital importance to next year’s polls and they will ensure the process runs like clockwork.

Below are the activities and important dates you need to keep your eyes on ahead of the showdown:

All aspiring political candidates are supposed to conclude their fundraising activities by December 9, 2021.

According to the IEBC activities to regulate public officers should be concluded by February 9, 2022.

Resignation of persons intending to contest as independents

Persons intending to vie for political seats as independent parties should resign from their current political camps on or before May 9, 2022.

Parties should have a clear presidential flag bearer by June 10, 2022. They will have from May 30, 2022 to decide on their candidate.

This will commence on June 3 and end on June 6 next year.

Gazette of polling and tallying centres

In the period between June 20 and June 24, 2022, the IEBC will gazette a notice highlighting the designated polling and tallying centres that will be used to vote in different parts of Kenya.

The General Elections will take place on August 9, 2022.

The final part of the election process will be done between August 15 and August 28, 2022.