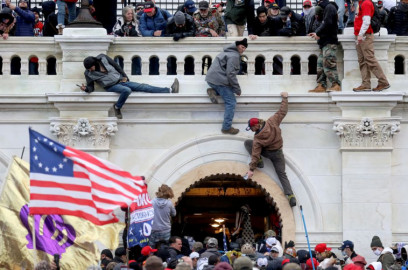 A mob of supporters of U.S. President Donald Trump fight with members of law enforcement at a door they broke open as they storm the U.S. Capitol Building in Washington, U.S., January 6, 2021. REUTERS/Leah Millis/File Photo

US President Joe Biden has blocked a second attempt by former President Donald Trump to withhold documents sought by lawmakers investigating the deadly 6 January attack on the US Capitol and ordered the latest batch to be handed over to Congress.

"Biden has determined that an assertion of executive privilege is not in the best interests of the United States, and therefore is not justified," Biden's counsel Dana Remus wrote in an 25 October letter to the National Archives and Records Administration.

Taylor Budowich, a spokesman for Trump, did not immediately respond to a request for comment.

A US House of Representatives committee is investigating the 6 January storming of Congress by Trump supporters who were seeking to halt lawmakers from certifying Biden's presidential victory. Five people died amid the attack and nearly 700 people now face criminal charges

A Democrat, Biden earlier this month blocked Trump's first bid to withhold an initial tranche of documents related to 6 January when the former Republican president still was in office, prompting Trump to file a lawsuit.

In both cases, the White House told the federal archivist that Congress must "understand the circumstances that led to ... the most serious attack on the operations of the federal government since the Civil War."

Citing the urgency of the congressional request, Biden ordered the archives to provide the latest documents 30 days after notifying Trump unless a court intervenes.

Lawmakers are also seeking testimony from a number of individuals, including top Trump aides and allies. One, Steve Bannon, has refused to appear citing Trump's claim of executive privilege and could face criminal charges.