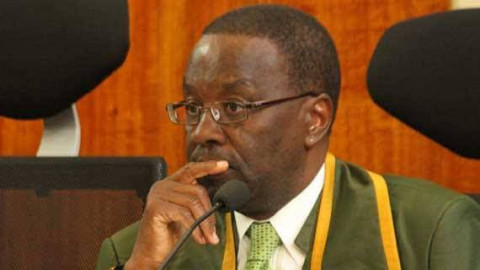 Former Chief Justice Dr. Willy Mutunga has come out to narrate how the 2013 Presidential election petition verdict nearly led to the crumbling of his nephew’s wedding.

“On March 30, 2013, my nephew and my family were meeting somewhere in Muthaiga. My nephew was going to get married – and he did – to a girl from Mukurweini. The two families were in Muthaiga discussing dowry and the wedding arrangements, ” Mutunga, who was then the Chief Justice, told the Sunday Nation.

“They had to stop to listen to the verdict. The moment we decided in favor of Jubilee, the Mukurweini people started singing their songs and dancing while the Kambas became very upset with me and my family.”

“I think some people said rude things about me,” added Mutunga.

“The meeting almost collapsed the relationship.”

However, Dr. Mutunga said almost two months later, on May 3, the two families were able to deal with the disagreement, and the wedding eventually took place.

“I was invited to talk to the people in the church... I gave them a lecture and said, ‘You are the people who are ruining this country." These kids fell in love, you were not there when it happened and you are talking about dowry and marriage. And then their petition almost rocks their relationship and marriage’,” Mutunga recounted.

In 2013, following the general election results announcement on 3 March where Uhuru Kenyatta was declared the presidential winner under the Jubilee Party.

The Supreme Court ruling that followed on 16 April, by the Willy Mutunga-led judicial panel, however, declared that the elections were conducted in compliance with the Constitution and the law and that Uhuru Kenyatta and his deputy William Ruto were validly elected.

“Justice is difficult,” Mutunga told Sunday Nation of the ruling, “Even your own relatives start thinking you were bribed.”