'One does not choose the tribe to be born into,' Raila says as he urges Kenyans to shun tribalism 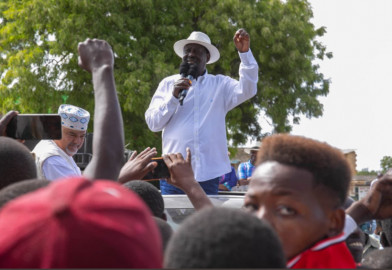 Orange Democratic Movement (ODM) Party leader Raila Odinga has reiterated his call for unity in the country as the country plunges into campaigns ahead of the 2022 General Election, saying it is the only ticket to a prosperous country.

Speaking on Sunday when he attended a church service at the Jesus Teaching Ministry church in Donholm, Nairobi, Raila urged Kenyans to shun tribalism and embrace each other.

“Let us stop discriminating each other on the basis of tribe. I have seen this country over the years, I understand Kenyans, many harbour hatred within their hearts towards other tribes,” said Mr. Odinga.

“One does not choose the tribe to be born into, what is important is that we are all Kenyans,” he added.

The ODM boss was accompanied by several lawmakers who rallied Nairobians to back him up in next year's poll.

Nominated MP Maina Kamanda, speaking at the service, hailed Raila as a wise leader, saying Kenyans would be safe in his leadership.

“In Gikuyu we say that wisdom is found where there is an elder, and we have an elder in Raila Odinga,” stated Kamanda.

After the service, Raila is expected to head out for a tour of Soweto and later address Embakasi East locals.

The former Prime Minister is expected to formally declare his 2022 presidential bid on December 10.

“Raila ​has checked his calendar and he believes that December 10, is the day that God has made for us to converge at the Kasarani Stadium, that is the day that Baba will speak with Kenyans,” ODM Director of Elections Junet Mohamed stated on Saturday.

This is a change from the December 9 date which had been communicated earlier.

Mohamed also stated that the much-awaited event will be held in the 60,000-seater football stadium and not the 5,000 capacity indoor arena of the sports complex.