Down Memory Lane: Kenya’s legends recall their conquest of Uganda in 1982 CECAFA final

Footballers often quiver with the thrill of winning back-to-back championships. Being title holders comes with the added pressure of maintaining that status as champions. For Harambee Stars, the task of defending their 1981 CECAFA title was to be carried out in Uganda in 1982—once again, on hostile territory.

“The 1981 triumph in Tanzania had given us a lot of confidence,” former Harambee Stars goalkeeper, Mahmoud Abbas explains. “We knew that we could repeat the same in Uganda.”

To win it in Uganda would elevate the players’ status from just ordinary champions to credentialed legends.

Harambee Stars had rid themselves of the underachiever tag and were now considered favourites. The way veteran defender Bobby Ogolla remembers it, an aura of invincibility had permeated into the squad.

“We were on top of the world. There wasn’t a single average player in the team,” Ogolla recalled in an interview with Citizen Digital.

In fact, for Coach Marshall Mulwa, the biggest task was to stop the confidence from spilling over into cockiness.

“Coach Mulwa always insisted on players keeping calm heads,” Ogolla explains. “He did not care how good we thought we were. All he wanted was for us to stay grounded.”

Grounded or not, Kenya went about handling their business with the same efficiency they had showed in Dar es Salaam.

A 2-0 win against Sudan in their opening group match was the perfect statement of intent. This was followed by a 2-2 draw against Zanzibar, which guaranteed Kenya’s safe passage to the semi-finals where they would take on Zimbabwe.

“The Zimbabweans had proved to be a bogey team for us,” Ogolla explains. “We however knew that if we stuck to our game plan, we would beat them this time.” The way Ogolla unpacks these memories with so much gusto and machismo is a clear testament to just how confident in their abilities the players were.

A J.J Masiga winner helped Kenya beat Zimbabwe by two goals to one. In the other semi-final, hosts Uganda were comfortable 3-0 winners against Zanzibar. This meant that for the second year running, Kenya would play the host country in the final.

“Kenya against Uganda was the final everyone wished for. We were excited to come up against our biggest rivals,” Mahmoud Abbas, hitherto considered to be one of the best goalkeepers to have donned the national jersey explained.

In 1982, Uganda was a country stuck in a rut. National morale was at an all-time low following a series of political upheavals. A win in the final against Kenya would perhaps serve as the perfect patriotism boost. In hope rather than expectation, the Ugandans threw their weight behind their team. They hoped that somehow, the Kenyans would have an off day. They hoped that unlike the Tanzanians, the home crowd would propel them to glory against their bitter rivals. They hoped that their gods would intervene and deliver a miracle. They hoped. These dangerous delusions would inevitably lead to heartbreak, of monumental proportion.

Wilberforce Mulamba struck first for the Kenyans. The hosts equalized, and although contentious, the goal was allowed to stand.

Chronic inaction from the match referee would lead to Ogolla getting a two inch gash above his eye after clashing with a Ugandan player.

“I cannot remember who it was that injured me. All I saw was blood soaking into my shirt,” Ogolla tries to recollect. “I had to get stitches with no anesthesia!”

In Mahmoud Abbas, the Kenyans had an ace up their sleeve. He had made a name for himself as an expert at saving penalties. The Ugandans knew this and attacked desperately in an effort to avoid the dreaded penalty shootout. However with the scores tied at the end of extra time, the game was to be decided by penalties. What followed was enough drama to rival any show on Broadway. 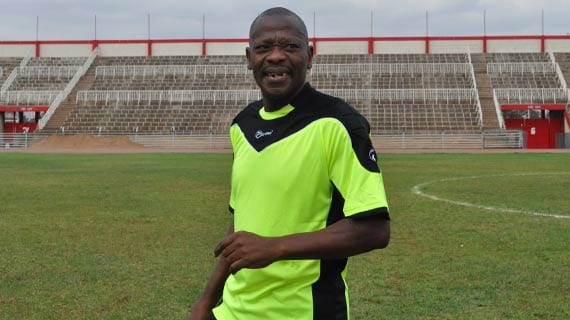 “I had a lot of belief in my ability to save penalties,” Abbas explains. “I dedicated a lot of time to perfect the art of reading penalty kicks.” Abbas discerned a nervous fear in the Ugandans with the way they approached the penalty spot. In front of their home fans, the Ugandan penalty inadequacies stood out in their stark enormity for everyone to see. Abbas would go on to save two spot kicks giving the Harambee Stars their most memorable CECAFA tournament win to date.

“It is hard to choose but the win in Uganda was much more enjoyable than the 1981 win,” Abbas proudly states.

This sentiment is echoed by Ogolla. “There was no doubt that we enjoyed the win against Uganda more. They were our biggest rivals.”

As thousands of disappointed, despondent and distraught Ugandans streamed out of the Nakivubo Stadium that day, one fact stood out and tormented their souls: The Cranes could fly but they could never reach the Stars.

In a period of less than three years, Coach Marshall Mulwa had transformed the Harambee Stars into a team of gladiators strong enough to challenge any rival. Only one item remained unchecked in their to-do list- winning the CECAFA tournament in front of their home fans. They would have the perfect opportunity to do just that in 1983.