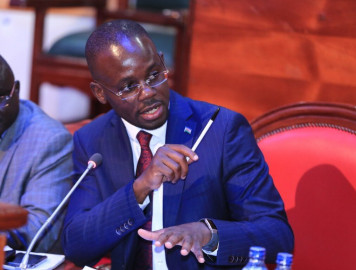 Speaking to Citizen TV on Tuesday morning, Kajwang’ argued that the current devices are at great risk of failure in next year’s polls.

“In the last voter registration exercise we saw the same devices that were used in the last election being used. Every technological device reaches a stage of obsolescence after a period of four to five years,” said the senator.

“We have not seen IEBC put proper measures to upgrade its hardware or software to ensure we are not going to have situations where devices are crashing or failing during voting. That is a very likely possibility,” he added.

The senator further accused the electoral body of engaging in tender wars instead of to streamlining the technological front in its elections preparedness.

“The tender wars that are going on tell us that IEBC is not ready to put in place a proper technology platform. We are now eight months to the election and we are still fighting in procurement tribunals, that is a red flag,” said Kajwang’.

This is after a multi-billion ballot paper tender was cancelled by the Public Procurement Administrative Review Board (PPARB) amid claims of tender wars and political interference from senior political figures in the country.

Appearing before the Justice, Legal Affairs and Human Rights Committee of the Senate on Wednesday, December 1, IEBC chair Wafula Chebukati said despite the fact that the tender normally attracts litigation, they expect to finalize the issuance of the tender by December 31.

Chebukati added that despite getting budgetary allocations late, they have already commenced procurement of general election materials, equipment and services with major ones being the ballot papers, elections technology, ballot boxes, security seals, logistics partners, media agencies among others.

“However, these tenders usually attract a lot of vendor interests which at times degenerate into vendor wars in terms of litigations, this may not only delay the process but also hamper preparation for elections,” Chebukati warned.

Acting CEO Hussein Marjan defended the move by IEBC to award the tender to Inform Lykos Company, which was cancelled, saying they had done due diligence and the company had handled poll materials in Nigeria.

“The evaluation committee visited the company and advised us that they can deliver, and I am also aware that they did ballot papers for Nigeria, comparing Nigeria’s population and ours, then it’s obvious they can deliver,” Marjan said.