Only 11,000 people to be allowed into Uhuru Gardens for Jamhuri Day celebrations - Gov't 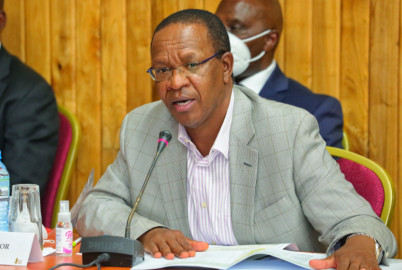 File image of Interior PS Karanja Kibicho during a past function. PHOTO / COURTESY

The government has announced that only 11,000 people will be allowed into Uhuru Gardens during this year's Jamhuri Day celebrations set to be marked on December 12, 2021.

Interior Principal Secretary Karanja Kibicho, according to a statement from the ministry to newsrooms, said of these 10,000 people will be in the public grounds while 1,000 will be in the dais.

PS Kibicho cited adherence to COVID-19 containment measures as the reason for the limited number, despite noting that it is more than three times those that attended the Mashujaa Day celebrations at Wang’uru Stadium in Kirinyaga last month.

"In adherence to the containment measures, we will allow only 10,000 people in the public sitting area, and around 1,000 in the main dias,” he said after leading the National Celebrations Committee on an inspection tour of the reconstructed gardens.

“Invitations will be done through our usual systems [Nyumba Kumi and the NGAOs structure] to ensure that there is equal participation and fair representation by all classes.”

The PS expressed satisfaction with the renovations at the gardens which has been closed for civil works for almost a year, describing it as “95 per cent complete.”

PS Kibicho said the National Celebrations Committee will hold a meeting to decide on whether parallel Jamhuri Day celebrations will also be marked across the counties as was the norm.

He noted that this will be based on a review of the current dynamics of the virus and the capacity.

“Ordinarily, since the beginning of the pandemic in our country, we have been holding just one celebration, which is presided over by the Head of State, while others are advised to watch on TV. We are not out of the woods yet. We will be making that decision this weekend," he said.