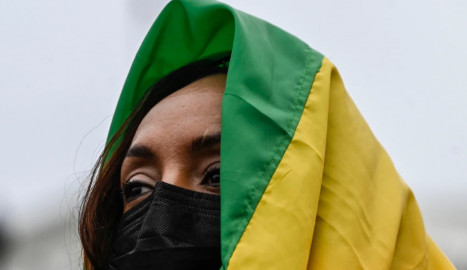 An activist listens to speakers supporting the Ethiopian government during a protest in Washington on Nov. 21, 2021.

Ethiopia has filed a complaint with Twitter accusing the social media giant of suspending accounts critical of Tigrayan rebels it has been fighting in a gruesome, year-long war, a government spokeswoman said Tuesday.

The dust-up highlights how both sides are trying to use social media to shape the narrative of the conflict between Prime Minister Abiy Ahmed's government and the Tigray People's Liberation Front (TPLF) rebel group.

"We have reason to believe that Twitter is targeting and suspending pro-Ethiopia voices that are raising awareness about the TPLF's atrocities and its lies," Abiy's spokeswoman Billene Seyoum said at a press conference.

"We have shared this with their policy team, that we believe Twitter has been infiltrated by TPLF sympathizers in the same manner that many democratic institutions and corporate spaces have also been infiltrated to provide a TPLF narrative."

Billene later told AFP that "a formal complaint" had been sent to Twitter.

She did not specify which "pro-Ethiopia voices" had been suspended.

But neighboring Eritrea, which has backed Abiy in the war, on Tuesday complained that Twitter had suspended the New Africa Institute, a self-described think tank that routinely echoes Ethiopian and Eritrean government talking points concerning the war, and its executive director Simon Tesfamariam.

A Twitter spokesperson said Simon's accounts had been suspended for violations of rules "including our platform manipulation and spam policy".

"This includes the creation of multiple accounts to post duplicative content and create fake engagement, and the operation of fake accounts," the spokesperson said, adding that rules are enforced "objectively" and that Twitter is politically "neutral".

The war in Ethiopia broke out in November 2020 after Abiy sent troops into the country's northernmost Tigray region to topple the TPLF -- a move he said came in response to TPLF attacks on army camps.

Ethiopian and Eritrean soldiers have been accused of massacres and mass rape in Tigray, while more recently the TPLF has been accused of similar abuses during its offensives in neighboring Afar and Amhara regions.

A joint investigation published this month by the UN human rights office and the Ethiopian Human Rights Commission warned of possible war crimes and crimes against humanity committed by all sides during the conflict.