Burnley v Spurs called off due to heavy snowfall 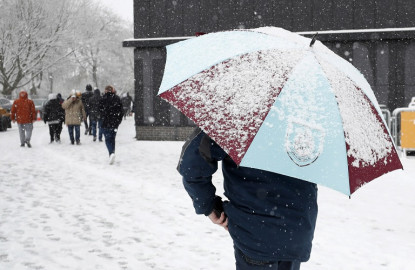 The Premier League match between Burnley and Tottenham Hotspur at Turf Moor was called off less than an hour before kickoff due to heavy snowfall on Sunday.

"Due to concerns with the playing surface and surrounding areas, it’s been deemed that the game can’t go ahead safely," Burnley said on twitter.

Groundstaff were working to clear the snowfall from the field when the announcement was made after consultation between the referee and the two managers.

"As you can see the pitch re-covers every time they clear it. The referee explained the safety angle as well so it was important to make a decision early," said Burnley manager Sean Dyche.

"It fell that quick and that heavy. It's still quite strong now. (The pitch) can't get rid of the snow that quick. It's the lines being cleared as well - we would have to stop and clear them. It's a joint decision with everyone concerned.

"We were ready for the game and I made it clear if it could be played we wanted it on - as did their manager (Antonio Conte). I can't see how it could go ahead the way the pitch is at the moment," added Dyche.

Burnley are third-bottom of the standings with nine points from 12 games, while Spurs are seventh on 19 points.