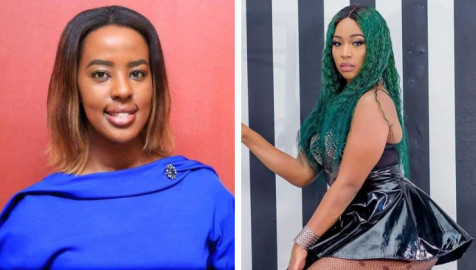 Marua who now goes by the stage name Diana B dropped the bars, addressing the separation between Machakos Governor Alfred Mutua and his now-estranged ‘wife’ Lilian Ng’anga as 'mapenzi ya kifala'.

Ng’anga responded to the name drop with encouragement to Diana, egging her on as she wades into a new career path as a rapper.

“Each of us can be anything we want to be. Diana Marua, be all that you can be! All of it.” Lillian wrote on her IG stories.

Diana seemingly compared her unwavering relationship with Bahati to several public break-ups which included among others: Harmonize (Konde Boy) and Frida Kajal & as well as Chris Brown and Rihanna.

This has come a few days after the unexpected revelation of Diana’s debut as a new rapper. The song ‘Hatutaachana’ has currently garnered over 700K views on YouTube in just two days after it premiered.