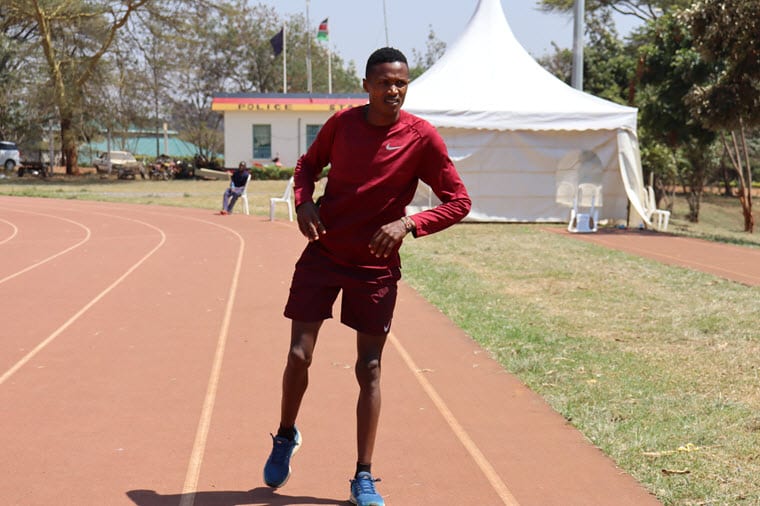 For 800m prodigy Kipng’etich Ng’eno the prospect of competing at this year’s World Championships in Doha, Qatar was a far-fetched reality when he lined up at the national trials held a fortnight ago.

The 800m race was indeed touted to be the most competitive race at the trials and was among the few events that attracted many athletes thus having to go through the preliminary stage.

At the finals, the race lived to its billing also as stars battled it out for the three only available slots in team Kenya for the global event slated for Doha, Qatar from September 27-October 6.

When Citizen Digital caught up with the athlete while training at the Moi International Sports Cnetre, Kasarani, Ngeno revealed that he was not certain to make the team not even did he dream to win the race.

“I had already counted myself out of the team because I knew (Emmanuel) Korir, (Ferguson) Rotich and (Jonathan) Kitilit were the favourites. For me I was just looking to lower my time,” he said.

“My target was actually to run under 1:45 so that I can enter next season’s IAAF Diamond League Series field as we had planned with my manager,” he explained.

Having bagged silver at the World Under-20 championships held last year in Tampere, Finland, Ngeno is among a cluster of young athletes set to make debuts at the biggest stage in the senior category.

This, is a challenge he says he is ready to deliver on, as another season plus that was not in his initial plans.

“First, I thank God for enabling me to make the team and I can assure you that I have no pressure at all. I know it will not be easy but I will just compete as Ng’eno and I hope I will make it to the podium,” he said.

The athlete who hails from Bomet County will now team up with Korir and Rotich who finished second and third respectively at the trials.

Ng’eno believes the trio can work together to deliver the medals although he is wary of the challenge posed by African Champion Nigel Amos of Botswana.

“My teammates are equally strong and I know we will work together when we qualify in our respective heats.”

Training in Kericho County under the watchful eyes of Gabriel Kiptonui, Ng’eno says he draws inspiration from the world 800m record holder David Rudisha, the man who last won a gold medal for Kenya in the event at the 2015 championships.

Being the first-born child in a family of six, the Sotit High School alumnus will be seeking to write his name in the history books when the 800m race at the Worlds kickoff on September 28 at the Khalifa International Stadium, Doha.