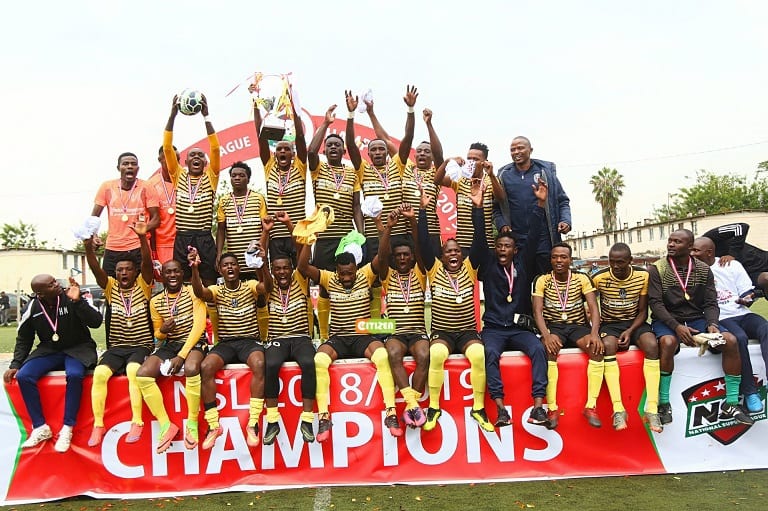 National Super League(NSL) has been wrapped with Wazito Fc getting a direct promotion to the Kenyan Premier League(KPL) after a 7-1 win over St. Joseph Youth at Camp Toyoyo stadium on Sunday and win the title.

Wazito Fc wrapped the NSL with 81 points, ahead of second place Kisumu All-Stars and Third place Nairobi time who won their last matches to finish with 80 points.
Kisumu beat Thika United 6-1 to earn direct promotion to KPL as Nairobi Stima prepares to face Posta Rangers in the promotion playoff.
A Waithera Joseph goal in the first minute of the first half gave Wazito a confident lead as they managed to dominate the game to extended their lead despite the numerous attacks that were posed by the visiting team St. Joseph Youth.
Minutes later Paul Acquah came in to score the second goal in the second goal.
A brace by Asembeka saw the first half ended 4 – 0 in favour of Fred Ambani’s side just before Waithera scored his second in the 54th minute to give them a 5-0 lead from a counterattack that was lead by Musa Masika.
Wazito showed lots of confidence while playing attacking. Onyango Derrick scored his first goal and the sixth goal for his side, with a flip shot from the right corner.
Wazito ere awarded a penalty after an offensive play from St. Joseph Goalkeeper Eric Ouma who was showed a yellow card with Waithre completing his hat-trick from the spot.
St. Joseph Youth saw their efforts bear fruits in the 88th minute with a solitary goal from Kevin Tabu.
Second, placed Kisumu All Stars also secured a direct promotion to the KPL after a 6-0 win over Thika United with third-placed Nairobi Stima getting a 4-2 win over Eldoret Youth at Eldoret Showground.
This now leaves Nairobi Stima behind in goal difference and will have to play Poster Rangers in a playoff the match that will determine who follows Wazito and Kisumu All stars to the KPL.
Other match Results
Kenya Police 2-2 Ushuru
Migori Youth 2-0 Kangemi All-Stars
Fortune Sacco vs Modern Coast Rangers
Kibera Black Stars 1-2 Nairobi City Stars
Green Commandos vs Coast Stima
Wazito 7-1 St. Joseph’s Youth
Administration Police vs Bidco United
Thika United 1-7 Kisumu All Stars
Shabana 3-1 FC Talanta
Eldoret Youth 2-4 Nairobi Stima